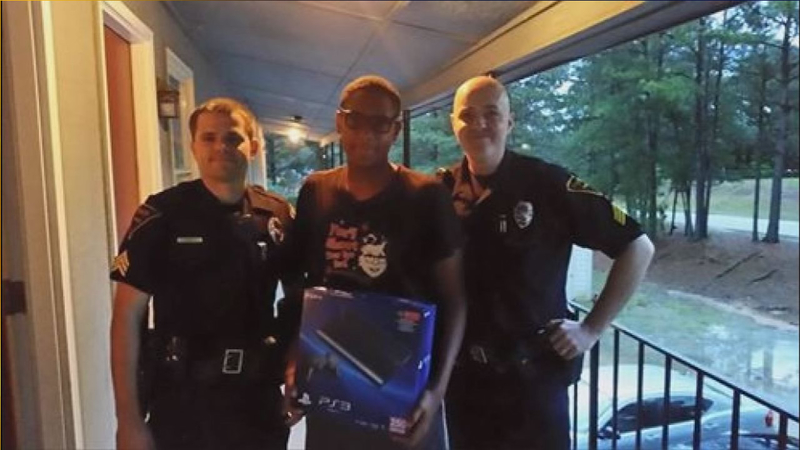 FAYETTEVILLE (WTVD) -- A pair of Fayetteville police officers went above the call of duty to make a teenager's day after someone stole his gaming system.

Officers Brett Chandler and John Newland went out and bought 15-year-old Zamonta Simmons another one with their own money.

"I would like to thank the officers that bought my son a PlayStation," said Zamonta's mother, Shafiqua Simmons. "I truly thank you."

Tuesday a thief or thieves broke into Simmons' apartment and stole her son's PlayStation 3, which left Zamonta heartbroken.

"I felt sad," he said. "Because that was like my prized possession and they took it."

Shafiqua Simmons said she too was scared and angry.

"For someone to come in and invade me, I don't bother nobody," she said. "I work and come home."

Simmons said after she filed a police report, another officer called asking for more details. Later that day, Chandler and Newland showed up with a new PS3.

The officers said it just seemed like the right thing to do.

"We found they were just good people," said Newland, "and a bad incident happened to good people. We just wanted to do a small gesture."

"Anytime we have the opportunity to give back to the community. We try to do so," said Chandler.

Shafiqua Simmons said she and her son were overwhelmed by the act of kindness, and posted the officers' picture on Facebook where it was shared hundreds of times.

"Lately on the news, it's been a lot of negativity about cops," she said. "I wanted them to know that I do know there are good cops out there, and those two officers needed to know that."