WTVD
By ELAINA ATHANS and the Associated Press 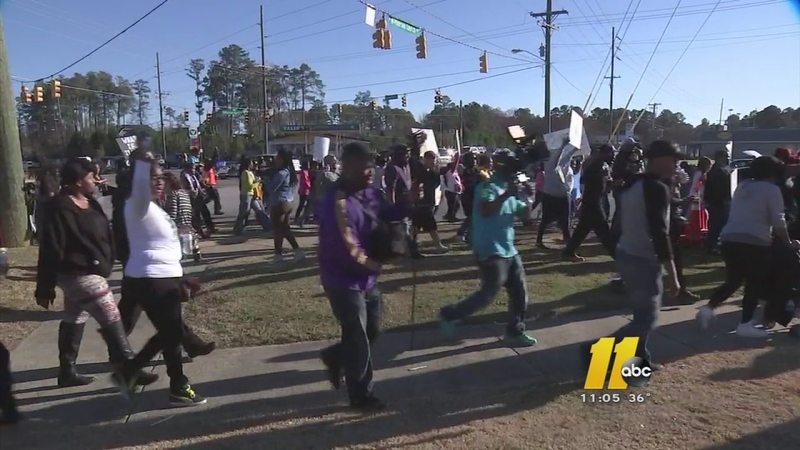 FAYETTEVILLE (WTVD) -- Protesters turned out in Fayetteville Saturday to call attention to the deaths of unarmed black men at the hands of police.

Organizers had originally billed the march as a die-in, but changed the focus in mid-week to a unity march. Organizer Swan Davis said he organized the event after discussions with friends about demonstrations in cities across the country protesting the deaths of Michael Brown in Ferguson, Missouri, and Eric Garner in New York.

Fayetteville Police Chief Harold Medlock addressed the crowd saying, "Today, Fayetteville, North Carolina showed the rest of the country how to have a demonstration."

For three-and-a-half miles, protesters marched in unity and leading the pack was the cousin of Garner, Ermese Finney.

"We just want to get justice. It's bigger than Eric. It's about Eric, but it's for all of us," said Finney, a student at UNC-Pembroke.

Garner was choked to death by a New York City officer. It happened not long after Brown was shot and killed by an officer in Ferguson. In both cases, grand juries decided not to indict the officers involved.

"When they let the verdict out, I was here," said Finney.

Finney is in the middle of taking finals at UNC-Pembroke. She was not able to join her family in Washington D.C. Saturday for a protest, but she has been pushing for a march in Fayetteville.

"Some sort of protest against the verdict and there was nothing. I thought like down here they didn't care. But this is good," said Finney.

About 250 people came out to the rally. It was peaceful, but sent a powerful message.

"We are one, no matter what race you are, we can some together. We can live together," said Davis. "At the end of the day, coming out here and tearing up our own community doesn't make a difference. But we can still come out here and get our point across and be safe while doing it, and letting them know we still mean business."

Medlock joined his community in the march. He says he heard the crowd's call for change and made a promise.

"We have work to do too. The police department has work to do and today I'm committing to you that were going to do that," said Medlock. "I want everyone here to know that we are you and you are us."

"I'm happy. The family would be happy. I can't wait to say 'Yes, were doing this down South too,'" said Finney.