Where's my free COVID test? Many have waited more than a month 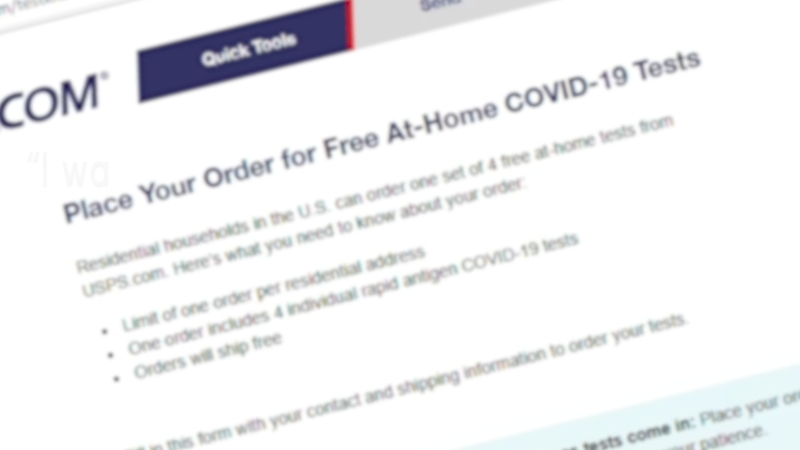 Where's my free COVID test? Many have waited more than a month

While the government claims more than 50 million households have received the four at-home COVID tests they ordered, we are hearing from ABC11 viewers who haven't gotten the tests more than a month later, and others still can't apply for the free tests.

"I was very enthusiastic about this government program," Mark Levine said.

However, his excitement turned to frustrations when Levine logged onto the US Postal Services website in January to apply for the four free COVID tests per residential address he's entitled to under the government's program.

"It says I have a commercial address," Levine said.

He lives in this Raleigh apartment complex and never had a problem getting mail.

"I go down speak to the postal master general, he goes on two different machines, there it's a residential address and he says Mr. Levine you should have no problem," Levine said,

He went back online, but still got a notice that says his address is listed as a business so he can't get the tests. He filled out this service request with USPS, three times, but he says no response.

"In the meantime, my wife and I are sitting here without the tests," Levine said. "I just want, you know, my health to be the priority here."

Levine got in touch with Troubleshooter Diane Wilson and she got his case to the USPS.

A representative said this is happening in very limited cases of addresses that are not registered as multi-unit buildings. Within days after our involvement, Levine got confirmation that his case was now resolved, and his free COVID tests were ordered and will soon be on the way.

Besides Levine, ABC11 viewers reached out after ordering their free tests more than a month ago, but still haven't received the tests.

Instead when they track their tests, a delayed message. According to the latest update from the White House, 85% of the requests for the free tests already filled which amounts to 50 million orders. The report states about 10 million are still waiting to receive their tests. Once the package ships, the government claims more than 60% are delivered within 24 hours, and 90% within 48 hours. Government officials also state it's prioritizing processing orders to households hardest hit by COVID and highest risk communities.