'It's ridiculous': Drivers in Fayetteville react as price of gas keeps on rising 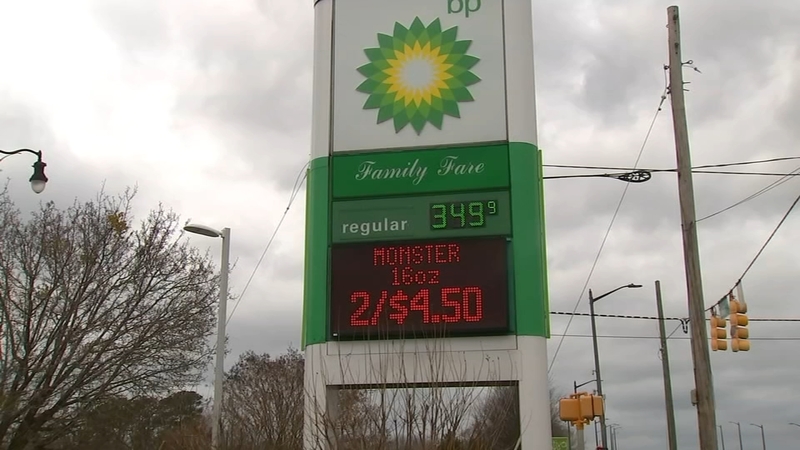 'It's ridiculous': Drivers react as price of gas keeps on rising

FAYETTEVILLE, N.C. (WTVD) -- The pain at the pump is real for Brittany Rypdahl in Fayetteville. ABC11 found her with tears in her eyes.

"It's stressful as a mom. It's horrible," said Rypdahl.

The mom of three lives off her disability check and is struggling with the rising price of gas.

Right now her tank is on "E" and with no spare money, she's putting $20 worth of gas on a credit card.

"Everything has gone up. Everything," said Rypdahl.

"And then I get to figure out dinner. And all this stuff," she said.

On Tuesday at the BP station customers were paying $3.49 a gallon for regular gas.

AAA estimates the average price a year ago in North Carolina was a dollar less.

Drivers said they are paying double to fill up.

"It is ridiculous," said Towanda Kegler, who was visiting Fayetteville from Greensboro. "You don't get reimbursed for this money. It's hard. I can't pay rent and all this stuff because I'm too busy trying to pay for gas."

Some researchers contend the reason for rising prices during the last eight weeks is the Russia/Ukraine conflict.

"Essentially think of the global oil market as oil producers filling up a pool of oil," said Patrick De Haan, the lead analyst for Gas Buddy. "If one major contributor to that pool stops filling it up, there's going to be less oil available for everyone that takes out of the pool. That's the collateral damage here."

The conflict is forcing nations, like the United States, to place economic sanctions on Russia.

"The Kremlin's aggression must be met with a swift, strong, and unified response. Serious sanctions against Putin are an important first step," U.S. Rep. Richard Hudson, who represents Fayetteville, said in a statement. "But they are only a down payment on our broader commitments to defend Europe and international peace."

De Haan said oil prices have just recently slowed to around $90 a barrel, so gas prices could stabilize briefly.

But a potential new oil deal with Iran and pending fallout with Russia could cause an increase. It could come just as gas prices typically rise next month for spring break and summer travel.

De Haan predicted the increase could be between 25 and 75 cents.

"Could be essentially a double whammy for motorists," said De Haan.

The Murphy USA on Gillespie Street is just one of the two places you'll find the cheapest gas in Fayetteville, currently at $3.19 cents per gallon, Gas Buddy said.