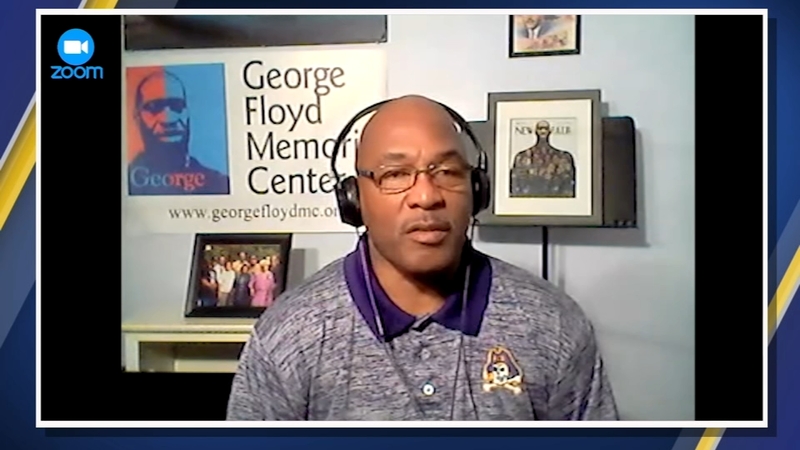 FAYETTEVILLE, N.C. (WTVD) -- Some members of George Floyd's family watched the first day of Derek Chauvin's murder trial and commented on it through a group text.

"It started off-'stay strong family because we know that the love of God is going to take us through this,' said McLaurin.

The trial of the year launched with opening arguments. Jurors and the nation seeing the video of Floyd dying under the weight of the fired police officer's knee.

The images from court were traumatic for so many to watch again across the Triangle, specifically black men.

"When I saw the video again it just conjured up these emotions," said Kerwin Pittman, a social justice activist. "I felt like a dagger was plunged deep into my soul again, so I was angry, I was frustrated, I was hurt, I was disgusted, I was dismayed."

"I was stuck and frozen. Like a nightmare. Not thinking this is real. When in reality this really happened," said Emmanuel Rhyant from Raleigh. "It's almost like it is tearing me in half because the first thought I have in my head is what if I have a mistake or bad day or I run into the wrong police officer will this happen to me?"

Josie Deanda, a Latina stylist in Durham, shared her perspective.

"I'm not being targeted so I don't think about it," said Deanda. "But I think that's something that I hope other people get to understand. That they are privileged to not have to think about those things. Sometimes we get caught up in our own--Like me, I didn't realize the trial was today."

Heather Redding is a social justice activist of Asian descent from Orange County. She shared these thoughts with ABC11.

"I feel like this trial is the pulse of where we stand as a nation in naming and demanding accountability for institutional racism. I'm hopeful that all marginalized people will come together in solidarity with George Floyd's family and community, and in recognition that our criminal justice system must be radically re-imagined. I hope that as AAPI communities consider how to keep each other safe, we also reflect on how calls for increased policing endanger Black communities. While I'm terrified of an acquittal and what that would mean for people who are already over-policed, the killing of George Floyd can't be unseen by the millions of Americans who are dedicated to antiracism, which gives me hope."

Floyd's family tells ABC11 they believe there will be massive protests if Chauvin is not convicted.