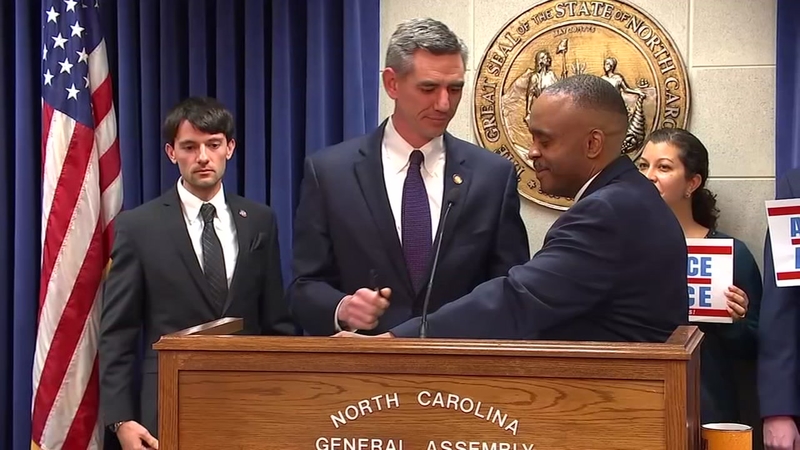 RALEIGH (WTVD) -- A bipartisan group of lawmakers is working to be proactive ahead of two major court cases dealing with gerrymandering -- the manipulation of election maps to favor one party over the other.

Under long-standing state law, the party that controls the legislature also controls redistricting. For decades, voting maps were created by politicians behind closed doors, which critics say resulted in unfairly drawn partisan districts.

That practice has resulted in gerrymandered voting districts that deprive voters of a voice in their elections.

On Wednesday, the group introduced House Bill 69, which hopes to put an end to that practice.

The proposed bill would have an 11-member citizens commission draw the maps.

In doing so, the belief is that it would be free from partisan politics, would have public input, and be fully transparent.

After its completion, the district would present the map to the legislature to vote on.

If passed, the bill would take effect in the next redistricting cycle in 2021.

McGrady said Republicans advocated for redistricting reform when they were the legislative minority prior to 2011.

"Supporting redistricting reform was right when we were in the minority, and it's still right now," McGrady said in a news release. "We are here to serve the people of North Carolina and we must make sure they can have full confidence in the integrity and fairness of our elections."

The bill comes amid a lawsuit that's headed to the U.S. Supreme Court in March.

There are claims that the Republican-led state legislature unconstitutionally redrew district lines.

There is a separate lawsuit that will be heard in the summer of 2019 in the state courts as well.
Report a correction or typo
Related topics:
politicsraleighgerrymanderingvotingpoliticsnorth carolina news
Copyright © 2021 WTVD-TV. All Rights Reserved.
TOP STORIES
The optimism on Omicron and why not to wait to get boosted
SCOTUS case on abortion law has major implications for North Carolina
NC Central law school gets $100,000 grant to help diversity efforts
LATEST: NC reports more than 3,000 new COVID-19 cases
1st case of omicron COVID variant identified in US
Thieves swipe at least $35k in designer bags from Cary boutique
Show More
Biden pledges to end HIV/AIDS epidemic by 2030
What we know about the Michigan school shooting victims
As Triangle home prices continue to rise, sales drop
Wake Health's COVID testing appointment requirement goes into effect
Fayetteville leaders still eye Murchison Road for rebrand
More TOP STORIES News