Raleigh unveils $300M plan for sleeker, faster buses. Will you ride them? 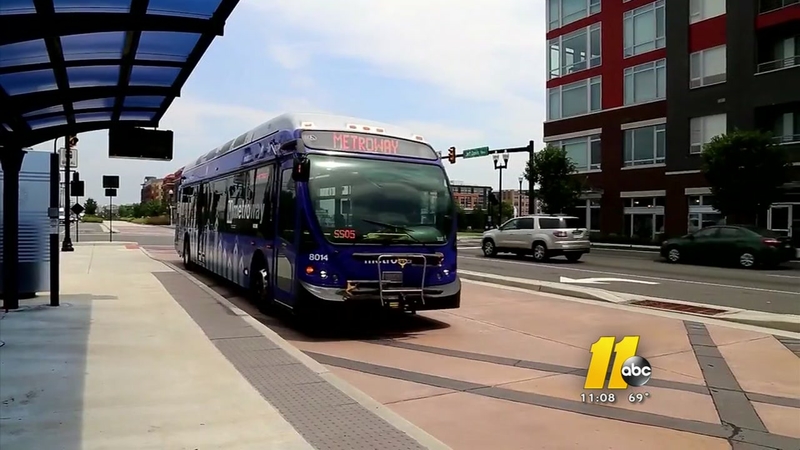 Sleek, smart buses: Will anyone ride them

RALEIGH, NC (WTVD) -- GoRaleigh unveiled a look at the future of transit in the Capital City at its public information session for its soon-to-be-built bus rapid-transit network.

The plans include sleeker, more modern buses that almost feel like light-rail trains. They travel in dedicated lanes of traffic making stops at newly-built platforms for passengers to get on and off.

Standard GoRaleigh buses travel about 12 mph on regular routes. BRT buses would go 16 to 20 mph, and the buses' computers would talk to the traffic lights - to make green lights longer and turn red lights green to keep the buses moving.

They say it’s like light rail 🚊 but on a bus 🚌...@GoRaleighNC wants feedback on its new bus rapid transit network. #transit #raleigh pic.twitter.com/68qOUPxVWw

At the GoRaleigh Operations Center on Poole Road, the public is being asked to choose which BRT lines would work best in the city: A north-south line that runs along Capital Boulevard and South Wilmington or South Saunders Streets and an east-west line that runs along New Bern Avenue and Western Boulevard.

The project comes with a $300 million to $400 million price tag - much of it paid for by the half-cent sales tax passed in 2016 in the Wake Transit Plan.

But will people ride them, given the very car-centric nature of the Triangle?

"That's what the Wake Transit Plan is about," said GoRaleigh Planning Director David Walker. "It's about building a network of high-frequency network service that is operating every 15 minutes or less that makes you want to get out of your car and get onto that bus, so we can get you quickly to where you want to go."

BRT is expected to be up and running in Raleigh by 2025.