According to doctors, the cancer affects about three people per 100,000. It's the same form of cancer Sen. John McCain was diagnosed with after doctors at the Mayo Clinic in Phoenix removed a blood clot near his eye.

Sen. McCain's age is a topic of concern. However, it's been noted how active the 80-year-old Arizona Republican is.

"Age plays a tremendous, tremendous factor," said Dr. Peter Fecci, an assistant professor of neurosurgery at Duke. "In fact when we look at things that predict survival from these tumors, how functional somebody is when they walk through the door with that tumor and their age are probably two of the greatest known and proven predictors in how somebody will fare as they undergo therapy as they move forward."
McCain is weighing his options on how to proceed with treatment. What is unknown at this time is whether the Senator will consider treatment at Duke. Almost a decade ago, then-Sen. Ted Kennedy received glioblastoma treatment at Duke University Medical Center. Kennedy died in August 2009.

Now, researchers at Duke lead the way in fighting this type of cancer by using immunotherapy. Staff at the medical center are focused on manipulating the immune system to recognize cancer as being a "foreign invader." From there, doctors decide to pursue treatment in the form of an antibody-based therapy, a form of vaccine, or virus therapy.

"Currently, there's no cure," Fecci said. "We don't talk about curing (cancer), we talk about keeping it at bay for as long as possible."

According to Fecci, a person with glioblastoma has a life expectancy of 13 to 18 months. However, with Duke's immunotherapy approach, the goal is to stretch the expectancy.
"We pride ourselves on having a variety of experimental treatments that when you look at the folks who have survived long-term with these tumors across the country," Fecci said, "almost all of those have been treated with experimental therapy. Such as the ones we offer here."

TODAY AT 5: Watch how researchers at @DukeHealth are taking the lead in fighting the same type of cancer that Sen. John McCain has. #ABC11 pic.twitter.com/fS6imlqCer

Dr. Fecci says Duke has "probably 8-10" vaccines or other immunotherapy trials open at Duke at any given time, making it the largest collection of trials in the US.

Researchers at Duke take what's known as T cells, or lymphocytes, out of a patient's body and train them to fight against the cancer and hopefully destroy it. "We can prevent that tumor from coming back as long as possible," said Fecci.

Fecci says even though glioblastoma affects a small number of people, it's far more common for doctors to see patients at Duke on an annual basis who have the cancer.

"Survival definitely ranges when you talked before the average is somewhere around a year and a half, give or take. But when you looked at folks who have survived much longer than that. Very many of those folks have been treated on the types of trials that we offer here," Fecci said. "And we actually do have people here currently at Duke that are being treated that are more than 10 years out with these tumors. So it does range substantially these days, to where 20 years ago that wouldn't have been feasible."

According to the assistant professor, Duke receives a large amount of funding for this type of research from the National Institute of Health, private donations, and various foundations."

If funding begins to be at risk, Dr. Fecci said, "all those advancements where we have those folks who are 10 years out, that's going to be the first thing that disappears because those clinical trials are the most expensive thing that we do in research."
Report a correction or typo
Related topics:
health & fitnessdurhamduke universitymedical researchcancerjohn mccain
Copyright © 2021 WTVD-TV. All Rights Reserved.
RELATED 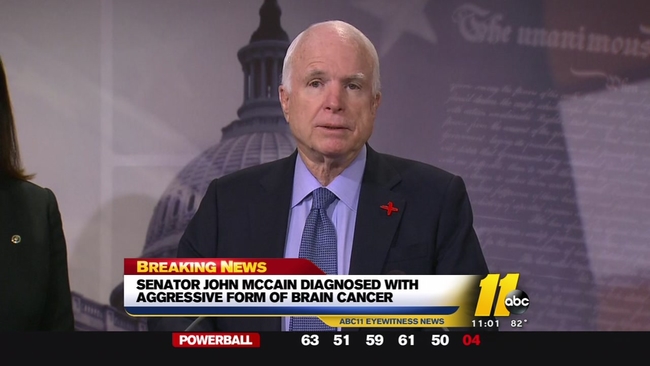