The Raleigh couple behind the first special needs orphanage in Panama 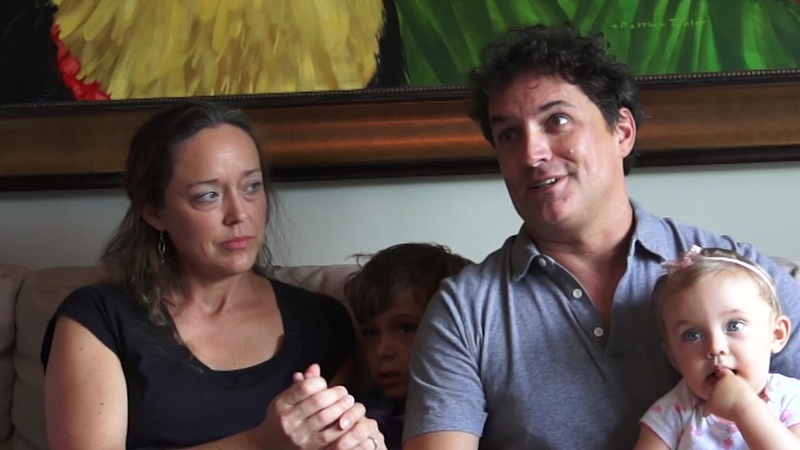 Eleven years ago, Matt and Misty Hedspeth went to Panama to adopt a child and go on a quick vacation but "God had a different plan."

For three years, Hedspeth and his wife, Misty, had lived in Panama City, Panama. They adopted their first son there. They built their lives around changing the adoption system in place there.

But for a moment, the couple felt as if they were back home in North Carolina -- where their extended family was, where their old lives had been before an unsuspecting trip put everything on hold.

"I felt so strongly that God was saying, 'I have more for you there.'"

Matt phoned Misty to tell her what had just came over him. He told her about the images he saw of the parentless children, and how he couldn't help but trust the strong, unfamiliar flashes.

He told Misty that he didn't feel right leaving their work unfinished, that they should consider moving back down to Panama.

Because, earlier that day, she thought God was speaking to her, too.

Three years before that, the Hedspeths were content with the life they had planned for themselves.

Misty was a family lawyer. Matt had his own successful real-estate development company.

Both were N.C. State graduates living in Raleigh. Both were devout Christians. And both, in different ways, favored adventure - even if they didn't know to what extent yet.

"I thought Matt and I were just going to get married, and live in Raleigh, and go to church, and maybe lead Bible studies," Misty said. "And life would be good."

Come February 2008, though, the Hedspeths wanted to start a family. And based on what medical professionals had told them, the couple wouldn't have biological children.

They soon made arrangements to adopt through Amazing Grace Adoptions, an agency based in Cary.

Thanks to Misty's work earlier in her career as a family lawyer, Amazing Grace Adoptions had become accredited with the Hague Convention, an international agreement to safeguard intercountry adoptions. Once Amazing Grace Adoptions was approved, the company wanted to set up a program in Panama - and the Hedspeths volunteered to be the first couple to go through that program.

The two planned a one-week trip. They allocated one or two days to submit their dossier and meet with officials with the governmental department that handles child protective services. And the rest of the time, Matt would fish and surf while Misty would read a book on the beach.

"But really," Matt said, "God had a different plan."

Helping Amazing Grace Adoptions wasn't as simple as Matt and Misty anticipated it being. One meeting led to another meeting. And then the next to another - each one coming with more details on the shortcomings of the nation's adoption system: Orphanages weren't equipped with adequate resources. Declaring children adoptable required a cumbersome family investigations process, so kids were aging out of orphanages without having a family to care for them. The investigation process itself wasn't digitized, so children's paperwork would sometimes - through no fault of their own - slip through the cracks of the system.

The couple never ended up going fishing or surfing. Instead of lounging on the Panamanian shore on the final day of their first trip, Misty received a surprising phone call -- from the first lady of Panama, Vivian Fernández de Torrijos.

"She told us that she would welcome our help to come down and legally assist the government to improve their process," Misty said.

"And how do you open that door, right? Only God can do that."

By June 2008, the Hedspeths were scouting out places to live in Panama City. By August, they started Heart's Cry Children's Ministry, an organization formed to enable local Panamanians to adopt the nation's parentless children.

By October, they had quit their jobs and sold what they could, holding yard sales to help fund their move to Panama.

"Once we decided God was calling us to go, we figured: two months," Matt said, laughing now at his naivete.

The two months would turn into years. Heart's Cry would partner with different organizations, providing services from rocking orphan babies, to driving social workers so they could perform family investigations for the orphans waiting to be declared adoptable.

All the while, the Hedspeths began assembling their team. Their first hire was Ari Herrera, their director of operations.

"I started volunteering about 11 years ago at another orphanage, bringing English as a second language to the babies there, and about a year after that, I met Matt and Misty," Herrera said. "I am just blessed to be able to be a part of this."

In late 2010, though, a year and some change after they first visited, Misty and Matt received a phone call. It was the Panamanian government.

The reason the couple first came to Panama was to adopt a child. And it was happening. In December 2010, Peter Hedspeth was welcomed into the family.

The Hedspeths took a trip back to the United States shortly after Peter, then 4, came into their lives. Because they had sold their house to help fund their first move to Panama, they were living in Misty's parents' beach house in Morehead City, N.C., on a six-month lease.

Everything was falling into place. Matt was lining up future, full-time employment for himself. The two had found a house they could see themselves starting a family in.

Peter was meeting his cousins and grandparents for the first time in North Carolina, and he was loving it. Heart's Cry didn't need to be a permanent project, they began to rationalize.

Matt said he couldn't explain what happened to someone who didn't experience it -- that it was potent; that it was out of nowhere; that "it was God."

But when Matt called Misty, she understood every word.

"(God) kept doing it over and over again, and I was ignoring it because I didn't really want to listen," Misty said. "That morning, I was reading my devotional, and the verse was, 'Why do you call me Lord, the word, and not do the things I tell you to do?'"

Matt remembers it as God presenting them with a choice: "It was, 'I have more for you, if you want to go,'" Matt said.

"But it was so beautiful and so strong. How could you say no?"

Misty describes the next few years the family lived in Panama as "just crazy."

"The doors had been closed before," Misty said. "And then all of a sudden, everything opened."

Returning to Panama, in effect, "threw the government into a little bit of surprise," Matt said. "It enabled more trust. It gave the government even more trust in us, seeing that we were that dedicated. And of course, God had way more in store for us."

The Hedspeths continued developing software to improve the efficiency of the adoption process, so each case wouldn't be handled with paper and pen. They continued partnering with other organizations, investigating orphanages. They made progress on building Casa Providencia, which, today, stands as the first ever special needs orphanage in Panama.

They even bore fruit from seeds they'd sown from their very first visit. Back in 2008, Misty had seen the adoption law, itself, as a key to moving the proverbial needle forward. She began writing a new Panama law in 2009.

The final touches of the bill were put on by April 2011, around the same time they committed to staying in Panama until their work was done - which, really, was for good.

The bill took a while to get the attention of a federal legislator, but once it did, the Hedspeths were leaders in the public debate.

On June 17, 2013, the Hedspeth's bill was signed into law as "Law 46: General Adoptions Law of the Republic of Panama." The law, among other things, enables the government to work through adoption cases faster by setting timelines for deeming a child adoptable. It also allowed foster parents to adopt the kids they look after - a practice previously illegal.

"It was very forward-thinking, and they didn't accept a lot of it," Misty said. "But at the end of the day, the core things that had to be in there, stayed.

Their story remains unfinished, though. And it probably will their entire lives.

Even though in 2018 alone the organization has assisted more than 22 people for pre- and post-placement services, has 11 adoptive families waiting for adoption referrals and houses 13 special needs children in Casa Providencia - problems in the greater national adoption system persist. As of June 2017, 2,083 children are in the 57 orphan shelters in Panama. And, from August 2016 to June 2017, only 42 children were adopted.

The cultural change that has succeeded Law 46 has required patience, too.

"The law from 2013 establishes clear time frames for both the government and the judiciary to do the investigations and then present the petition to the judge to terminate parental rights and declare the child adoptable," said Graciela Mauad, Heart's Cry's full-time, resident lawyer. "But those time frames are only on paper. In practice, they are not executed."

The future, the couple admits today, terrifies them: Heart's Cry provides all of their services for free, so it relies on donations to pay their staff and to provide their services and resources. And with their largest, most-expensive project in Casa Providencia now over a year underway, money is a recurring point of concern.

"We have some things planned out, but if we had to plan out everything on a spreadsheet that would cover us and our kids through our and their lives financially, we just would never be doing this," Matt said. "You can't."

But the two are still eased by their trust in God.

The couple visited Panama to adopt. They came back because they were called to. And now, 11 years later, they're staying - convinced that they're just ordinary people who don't want to throw away a gift that has yet to stop giving.

"I mean, praise God," Misty said, reflecting on how this adventure made its way into her life plans.