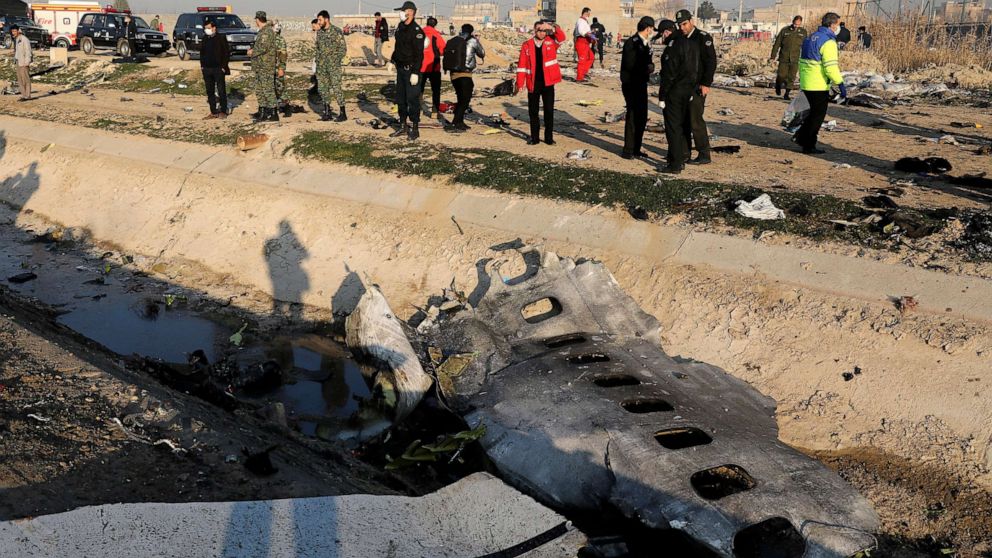 The United States believes it is "likely" Iran shot down the Ukrainian passenger plane that crashed this week in Iran, killing all 176 on board, Secretary of State Mike Pompeo said Friday.

"We do believe that it's likely that that plane was shot down by an Iranian missile," Pompeo told ABC News Chief White House Correspondent Jonathan Karl during a White House press briefing. "We are -- we're gonna let the investigation play out before we make a final determination. It's important that we get to the bottom of it."

Asked by Karl if the United States would allow the National Transportation Safety Board to work with Iran, which is leading the investigation into the Wednesday morning crash, Treasury Secretary Steven Mnuchin said that the U.S. government would permit exceptions to sanctions against Iran.

"The Treasury will issue waivers for anybody, whether it's Americans or others, that can help facilitate the investigation," Mnuchin told reporters at the White House.

On Thursday, a U.S. official had told ABC News that it was "highly likely" Iran shot down the plane.

The crash happened just hours after Iran had launched more than 20 missiles at U.S. military facilities in Iraq, which fueled speculation the plane might have been shot down inadvertently by the Iranian military. Those missiles were fired at U.S. military sites in Iraq in retaliation for a drone strike that killed one of Iran's top generals.

U.S. intelligence is confident that Iran painted the Ukrainian airliner with radar and fired two surface-to-air missiles that brought down the aircraft, a U.S. official told ABC News. The official said that an American satellite had detected the heat signature of the two missiles as they approached the airliner.

The same assessment was made by Canadian Prime Minister Justin Trudeau.

"We have intelligence from multiple sources, including our allies and our own intelligence. The evidence indicates that the plane was shot down by an Iranian surface-to-air missile," Trudeau told reporters on Thursday.

"This may well have been unintentional," he added. "This new information reinforces the need for a thorough investigation into this matter."

President Donald Trump said earlier in the day at the White House that he didn't know whether the airliner had been shot down by Iran, but "I have my suspicions."

"Somebody could have made a mistake on the other side," Trump said. "I have a feeling that something very terrible happened, very devastating."

The type of surface-to-air missile used was not disclosed by Trudeau or the U.S. official, but photos taken at the crash scene that have appeared on social media seemed to show the remnants of a Russian-made TOR missile. NATO identifies this air defense system as the SA-15.

Iranian officials were quick to blame the crash on a technical problem and rejected that the aircraft could have been struck by a missile.

"The engine had caught fire. If the reason of the crash was missile, then it would explode in the sky. But the fire was in the plane engine and the pilot's attempt to control the plane was unsuccessful," Qassim Biniaz, a communications chief at the Iranian Ministry of Roads and Transport, told the state news agency IRN shortly after the crash.

Ukraine's embassy in Tehran initially issued a statement confirming the Iranian version of events but then deleted it. Ukrainian officials later said it was too early to rule anything out.

But the U.S. military strongly suspected that the Ukrainian airliner had been brought down by an Iranian air defense system shortly after the plane had gone down, according to a U.S. official.

The launch of the surface-to-air missiles was detected by American satellites used to monitor missiles launches from a number of adversaries around the globe.

The satellites, known as the Space Based Infrared Systems, or SBIRS, use infrared technology to scan landmasses for the heat signatures that indicate missile launches that could pose a threat to the U.S. homeland or American personnel overseas.

Iranian investigators on Wednesday said they had recovered the plane's "black box" flight recorder and were studying it. Iran released a preliminary report suggesting the plane had crashed while attempting to turn back toward the airport to make an emergency landing.

According to FlightRadar24, the Boeing 737-800 airliner bound for Kyiv, Ukraine's capital, took off at 6:12 a.m. from Tehran's Imam Khomeini International Airport. Data from the plane dropped off just two minutes into the flight and suggested something catastrophic occurred.

Footage aired on Iranian television and released by the Iranian Red Crescent showed the plane's wreckage scattered across a field in small fragments.

The incident is the second time in recent months that the Iranian military's air defense systems have sparked an international crisis.

Last summer, a U.S. military drone flying over the Persian Gulf was shot down by an Iranian air defense system that almost led to U.S. retaliatory airstrikes. That incident led to speculation that the Iranian team manning an air defense site had not reached out for authorization to shoot down the aircraft from a higher headquarters.

"They've shown in the past that their command and control is not very good and that operators on the ground often act independently," said Mick Mulroy, an ABC News contributor and former deputy assistant secretary of defense for Middle East policy. "They don't coordinate."

Mulroy added that if it's proven conclusively that Iran shot down the airliner, Iran should have grounded all commercial aircraft after their initial missile strikes into Iraq "to determine the situation because it's just incompetence."

Ukraine's Foreign Minister Vadym Prystaiko said 82 Iranians and 68 Canadians died in the crash. Eleven Ukrainians were killed, among them the airliner's nine crew members, he said. Ten other passengers were from Sweden, four from Afghanistan, three from Germany and three from Britain, according to Prystaiko. At least 16 passengers were younger than 10.

People were quick to draw comparisons to the downing of Malaysia Airlines flight MH17 which was hit by a Russian-made missile while it was traveling over Ukraine in 2014.