Bill would give lawsuit immunity to drivers who hit protesters 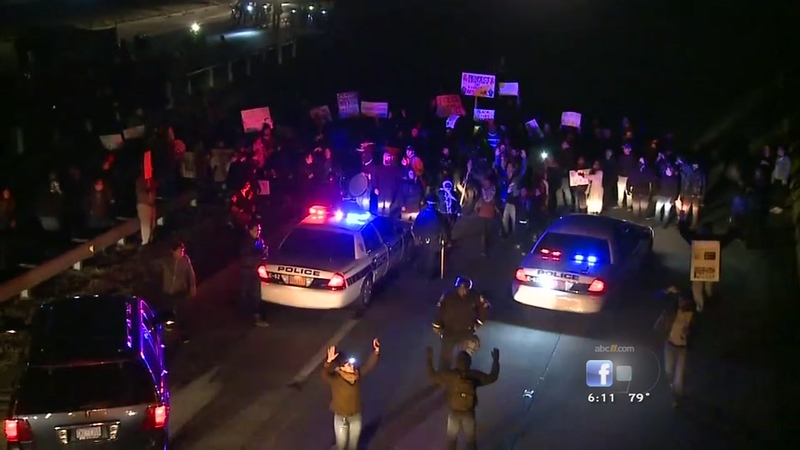 Bill would give lawsuit immunity to drivers who hit protestors

RALEIGH (WTVD) -- North Carolina's House of Representatives is set to pass a bill that would grant civil lawsuit immunity to a driver who hits someone protesting on a public street.

House Bill 330 has passed on two readings and is expected to get final approval Thursday. It would then go to the Senate for consideration.

The proposal comes after several protests in recent years have taken over streets in the Triangle. Some have even shut down the Durham Freeway.

In December 2014, a protest at Southpoint Mall took over a street and a truck driver tried to get through anyway. The driver was charged, but no one was hurt, and the charges were later dropped.

But if he had hit someone, the bill now in the General Assembly would mean he would not have been liable in civil court for injuries to anyone hit in the street.

Drivers we spoke with Wednesday said they get the intent but fear some of the possible consequences.

"I don't necessarily agree with people going into the road and stopping the flow of traffic or causing problems with safety, but I do think it would protect someone driving just trying to maybe get through and not involved in that situation," said Clayton resident Deborah Purcell.

"The downside would definitely be that someone thinks they're protected by this bill and then they cut through traffic and maybe not be as fearful in hurting someone or harming someone that's standing in the middle of the road," offered Garner resident Kelly Gay.

That sentiment was echoed on the House floor Wednesday, and that got a swift response from the bill's primary sponsor.

"You know what this bill is going to get unfairly mischaracterized? The state of North Carolina. That's what's going to get unfairly characterized because when we pass this bill we're going to be on national television again because they're going to be laughing as saying, 'Oh, look North Carolina just passed a law that makes it legal for you to run over protesters. Ha, ha, ha, ha, those dumb rednecks down there,'" said Rep. Graig Meyer - (D) Orange.

The text of the bill says a driver is protected if they are "exercising due care and injures another person who is participating in a protest or demonstration and is blocking traffic in a public right of way."