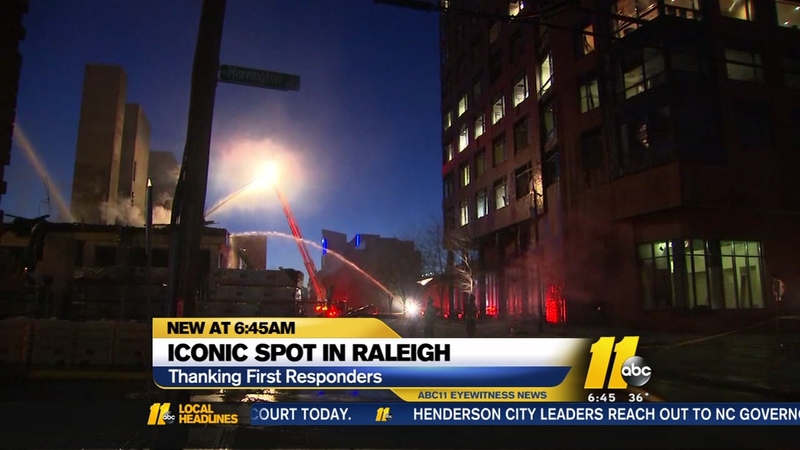 RALEIGH (WTVD) -- To thank first responders for all of their hard work fighting the downtown Raleigh fire, the Holiday Inn is hosting a free luncheon.

The iconic Holiday Inn sits 19 stories tall just off Hillsborough Street. The hotel started construction in 1969, opening to the public in 1970.

Though many longtime residents of the Triangle may know of the restaurant, that holds the top floor and that overlooks the city, newcomers to the city may not - it's estimated that 64 people per day move to the area.

The views are inarguably gorgeous, even on a not so gorgeous day, but there was one day in 2017 the skyline of Raleigh glowed brightly. The reason, however, not a good one.

The orange glow reflecting off a smoke-filled sky could be seen all around downtown.

The five-alarm fire led first responders to fight the blaze well into the night. The sight not one far from the Holiday Inn.

Dillion pointed out the window on the left side of the room, "It is directly behind us and you can see the building is starting to come up," he said of where that fire took place.

Now, just over a year later, the hotel, along with numerous other Raleigh businesses, want to say "thank you" to those first responders who kept an already dangerous situation from turning fatal.

"We wanted to honor those first responders who did such a great job and recognize them a year after things settle down," Dillion said.

The meal is free to first responders; the public is invited to attend, though they will have to purchase their own lunch.