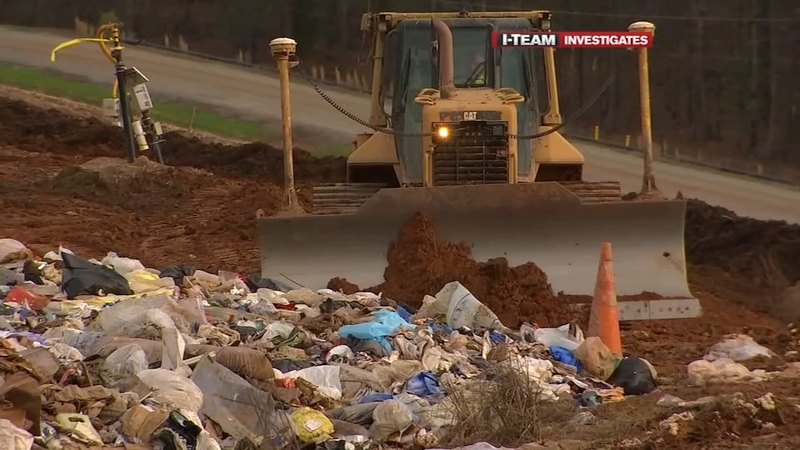 HOLLY SPRINGS, N.C. (WTVD) -- The three rules of real estate might be location, location and location, but what happens when a very popular location emerges near somewhere city planners never envisioned?

Such is the dilemma in Holly Springs where growth continues to outpace expectations in an area that decades ago, officials decided would be a good spot for a landfill.

Many current homeowners told ABC11 that they were aware of the nearby South Wake Landfill, but for years the smell had never been a problem. Until now.

"I'm from New Jersey and New Jersey smells better than this," resident Nicole Snyder joked. "If you stick your head in your garbage can and try running around with little kids having to be that in. It's pretty gross."

The number of complaints has been growing just like the population, which also means more trash and more development, taking away many trees that had been a natural barrier.

The landfill's managing company, GFL Inc., is offering a settlement to nearby homeowners worth approximately $900,000, and homeowners such as the Snyders have until Feb. 20 to sign on.

Nicole Snyder said they are a no.

"It's not about getting more money. It's about fixing the issue that we don't smell the dump when we try to play outside with our kids," she said.

Wake County still owns the landfill and to its credit is working on a number of odor remedies. John Roberson, Wake County Solid Waste Management Director, said his team has traveled to Florida and Virginia to study odor-fighting methods.

"I don't know anyone has a perfect solution for a landfill that is fairly urban in nature," he told ABC11. "One of the things we continue to say is we haven't stopped. We continue to look for new ideas."

In a newsletter just posted this week, the county spells out some of those efforts, which include a foam spray and vapor pumping system. There are pluses and minuses for both.

According to Roberson, the weather is emerging as a tough challenge.

"Once it stops, the rain causes all kinds of problems or in the landfill itself or in the landfill gas system," he said. "Is climate change a factor here? Who knows? Will it slow down the rain next year and slow won't be as big a problem? That can be our hope, but we're not hoping, we're out here work toward mitigating as best we can based on the current weather conditions."
Report a correction or typo
Related topics:
societyholly springswake countyfamilyneighborhoodlandfillwaste managementhomeowners
Copyright © 2022 WTVD-TV. All Rights Reserved.
TOP STORIES
12-year-old, mom badly burned in science experiment explosion
'Miracle baby' improving thanks to last-minute treatment
Tropical Storm Bonnie forms in Caribbean Sea
Activists call for arrest of Raleigh woman connected to Till murder
NC 2-month-old killed, parents charged
FBI raids Fayetteville church accused of operating as a cult
Homeownership becoming more expensive in the Triangle
Show More
Family member beats shark to free teen girl from its jaws
2nd visitor in 3 days gored by Yellowstone park bison
California late start law aims to make school less of a yawn
New Zealand designates Proud Boys a terrorist organization
Local law students react to swearing in of Ketanji Brown Jackson
More TOP STORIES News