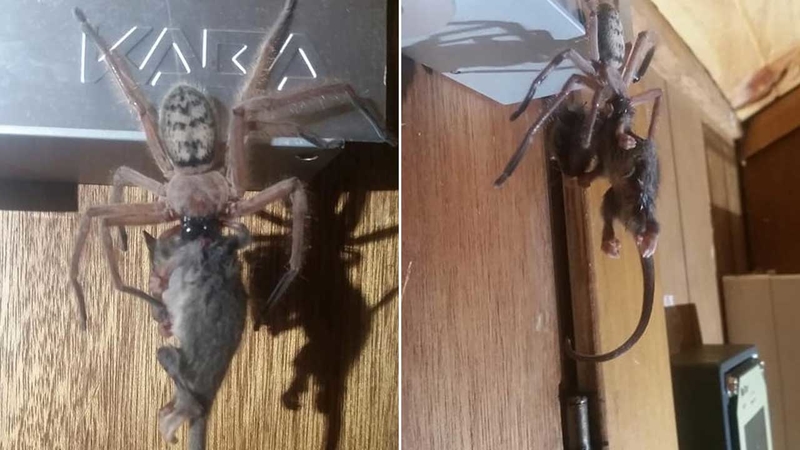 TASMANIA, Australia -- If you have a fear of spiders, a pair of photos going viral probably won't help with that: They appear to show a massive spider eating a possum.

Justine Latton's husband, Adam, took the photos a few weeks ago at an old ski lodge in Mount Field National Park in Tasmania, Australia, she told ABC in a Facebook message.

The photo looks hard to believe at first glance, but Justine said it's important to understand the scale. Justine believes the mammal to be a pygmy possum, an animal common to the region which Tasmania's Parks & Wildlife describes as the smallest possum in the world. This particular possum was about the size of a large walnut, Justine said.

"It's a very cute little animal that sits in the palm of your hand," she told podcast Tasmania Talks.

Justine said the spider is a huntsman spider. They're known for their massive size relative to most spiders, and it's not unheard of for them to be the size of an adult's palm, according to Australian Geographic magazine.

This particular huntsman was one of the biggest her husband had ever seen, Justine said.

Justine said Adam, who did not want his last name disclosed, was staying at the ski lodge with some friends. Adam first spotted the animals while he and a friend named Roger were doing minor repairs on the door.

"He was holding the torch [flashlight] for him, I think. He spotted this thing. He just goes, 'Roger, don't freak out but just look above your head,'" she said, "And it was about 20-30 centimeters [8-12 inches] above him."

Roger, who Adam refers to as the "bravest spider man in the world," had a casual reaction, Justine said.

Since the spider was clinging to the door hinge, they couldn't open the door without removing the spider, Justine said. Roger got an ice cream container and used it to transport the pair outside.

Justine added to ABC: "No spiders were harmed in the relocation effort (too late for the possum)."

Since Adam doesn't have social media, Justine was the one who posted the photos to a Facebook group called Tasmanian Insects and Spiders, where fellow nature enthusiasts remarked that the photo was both the "stuff of nightmares" and a "great specimen of nature."

The summer season is off to a colorful start for one Cape Cod restaurant that received an incredibly rare blue lobster out of the blue earlier this week.