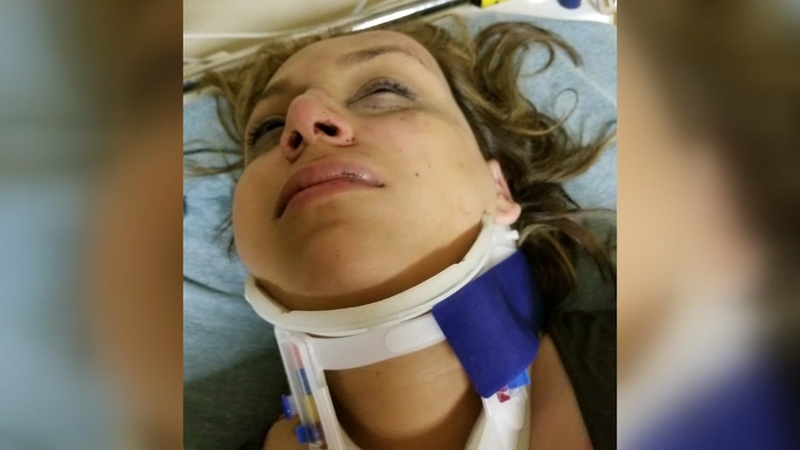 HOUSTON, Texas -- Houston police are searching for a man they say robbed and assaulted a mother of three while she was walking to her car at IKEA.

Stephanie Anguiano said she was attacked around 6 p.m. Sunday when the sun was still out and the parking lot was packed.

She had her cell phone in her hand and was wearing a purse around her shoulder.

Anguiano's purse strap snapped in two, and that's when she says her attacker's face changed.

"I just remember his face angry that I was fighting back and that's when he raised his arm and started swinging with the gun," she said. "The whole side of the gun just kept hitting me and hitting me and I didn't let go."

She handed over her cell phone but never gave up her purse.

"They're taking your identity when they take a woman's purse," Anguiano said.

She said the man got away, jumping into a grey Nissan Altima with three other men.

"My vision was blurred when it happened. I couldn't see license plates, nothing," she said.

In a statement, IKEA expressed the well-being of customers and its workers as the top priority.

"The safety of IKEA customers and co-workers is always our highest priority. With regard to the reported incident in our IKEA Houston store, local law enforcement was called immediately, and they are currently investigating this matter. AS IKEA is cooperating with the police, any questions regarding the details of this incident should be forwarded to the Houston Police department. Please note that since this a current police investigation, we cannot comment any further. Thank you for your cooperation."
Related topics:
ikeacrimeassaultrobberynational
TOP STORIES
Streets of Southpoint reopens Saturday after shooting that injured 3
Netherlands confirms 13 cases of omicron variant; Australia reports 2
Cyber Monday 2021 deals shopping guide
Fauci says omicron variant will 'inevitably' arrive in US
3 killed, 1 arrested in Robeson County shooting
Giants set to honor Michael Strahan with jersey retirement
Show More
Fire destroys guitars at house of Avett Brothers' father
Rep. Lauren Boebert issues apology for anti-Muslim remarks
Ahmaud Arbery's mother speaks out after murder trial verdict
UK, Germany, Italy report cases of new omicron variant
Girl paralyzed in porch swing accident now helping other injured kids
More TOP STORIES News