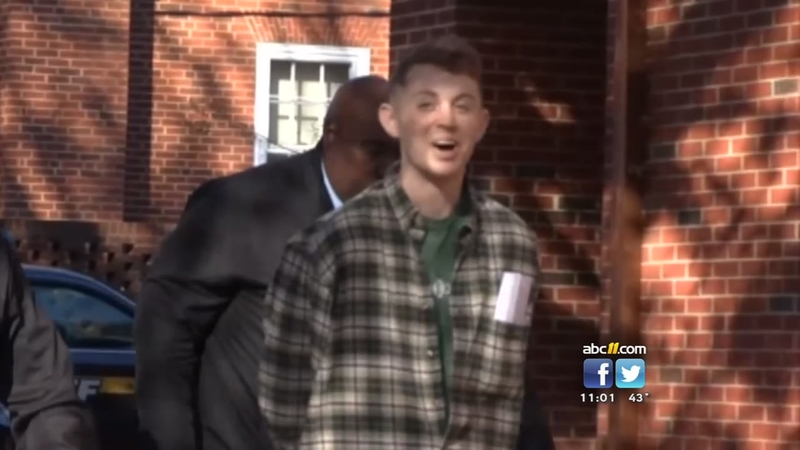 HILLSBOROUGH, North Carolina (WTVD) -- The man accused of setting up an explosive device at a historic tree on UNC's campus made his first court appearance Thursday, facing up to 25 years in prison if convicted.

Joshua D. Edwards, 24, entered the Orange County Courthouse in handcuffs and wearing a smile, declaring, "Hug a tree for me, please. Hug a tree."

A former UNC student, Edwards is charged with six felonies, including malicious use of incendiary device

An incendiary device detonated near the Davie Poplar tree

His appearance on Thursday comes two weeks after the incident at the Davie Poplar Tree at the University of North Carolina-Chapel Hill, and it also follows two weeks that Edwards spent in medical evaluation.

The fire injured one professor, Dan Reichart, who said he feels no anger toward Edwards but hopes justice is served.

"Mental illness is a tough thing," Reichart told ABC11. "I know a lot of people have suffered through it and I hope (Edwards) can get the treatment he needs."

Reichart, whose UNC career in the Astronomy department spans 15 years, received the Old North State Award on Thursday from Gov. Roy Cooper for his bravery in trying to put out the fire. He sustained first- and second-degree burns on his face and arms, and plans to return to class in the spring.

ABC11 has decided to slowly reduce the number of stories on the website that have a comments section. We believe very strongly that our audience should have an opportunity to discuss and debate events in our world, however, we have not been able to moderate the comments as well as we would like. Instead of hosting a platform that could allow a few loud and ugly voices to dominate a conversation, we want to encourage everyone to join us on our social media platforms and speak out there. Facebook: facebook.com/ABC11 Twitter: twitter.com/ABC11_WTVD
Report a correction or typo
Related topics:
chapel hillorange countychapel hill newsexplosionorange county newsuncfire
Copyright © 2021 WTVD-TV. All Rights Reserved.
TOP STORIES
Walnut Creek welcomes fans back for first live event since 2019
Cary 17-year-old advances to semifinal in women's 100-meter butterfly
2 killed in double shooting on I-85S entrance ramp near Duke St
WEATHER: A warm weekend with more rain chances Monday and Tuesday
Black car buyer's experience marred by dealer's 'racist' Facebook post
Company wrongly charged woman monthly since 2019
Show More
Search for bodies concludes at FL condo collapse site
Brisk crowds greet return of Peak City Pig Fest
Family continues legacy of man who died in car wreck
NC counties with more cases have fewer vaccinated residents
Study finds more African Americans are buying life insurance
More TOP STORIES News