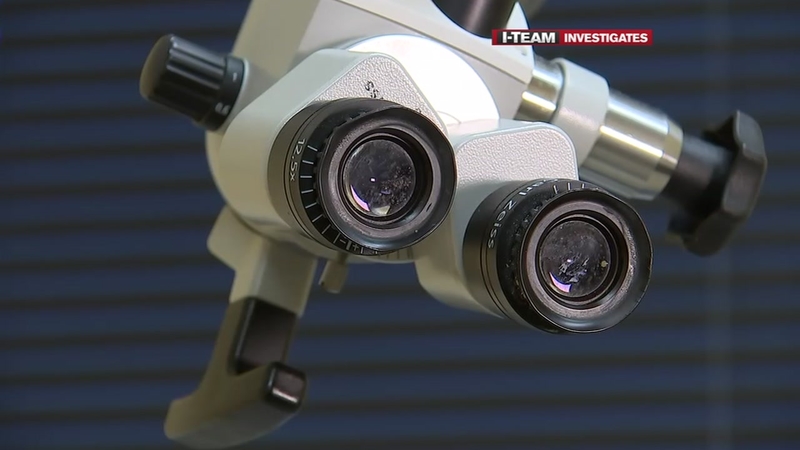 The ABC11 I-Team is investigating how expanding hospital systems could affect your care and your wallet.

The Triangle is home to three major hospital systems - Duke Health, WakeMed and UNC REX Healthcare - and their footprints continue to grow with their acquisitions and mergers with clinics, rehab centers and private practices.

According to the North Carolina Healthcare Association, as many as two-thirds of all physicians in the Triangle now affiliate with a hospital system, and it mirrors a nationwide trend.

"It should be choices"

Khalil Prattis had a nagging pain in his wrist after a game of pickup basketball a couple of months ago, and it was his mother, Jonnell, who finally nagged him enough to make a trip to the Emergency Room when the swelling never went down.

"I just couldn't move my hand," Khalil recalls to ABC11. "I couldn't take it anymore."

Mom's hunch was an accurate one - Khalil sustained a fractured scaphoid, a small bone in the wrist under the thumb. Khalil, the ER staff explained, would need to visit an orthopedic, sports medicine or hand specialist, and would most likely require surgery.

What Jonnell heard next, however, was something she says nearly made her fall over.

When Prattis asked for another referral, she says the hospital would only list practices in the hospital system.

"Everything is under WakeMed - WakeMed this, WakeMed that. I just wanted to take (Khalil) to the best doctor which I felt would do a great job with him and not make him wait."

Indeed, there are several other physicians in the Triangle capable of treating Khalil, but his mother realized finding those not affiliated with the hospital would be her responsibility. She also knew she ran the risk of finding a doctor that would next accept her insurance - or be considered "out of network."

"It should be choices," Prattis asserts. "I want choices about where I can go besides to where they want me to go."

Prattis finds a doctor - who shares her concerns

Just as Khalil got help from his mother, Jonnell Prattis would get help from her own mother with a recommendation to visit Dr. James Post at the Raleigh Hand to Shoulder Center, a private practice in Raleigh.

Dr. Post did, in fact, accept Prattis' insurance - and scheduled him right away for an office visit and subsequent surgery. In their conversations, moreover, Prattis would find that the doctor had a similar prognosis regarding the expanding reach of hospital systems.

"If hospital systems are no longer referring outside the hospital system, then it's hard for us to survive," Post says in a sit-down interview with the I-Team. "It's a constantly moving target and our goal is to move with the target and still keep providing quality care at a low price that's competitive with all the major hospital systems.

Post has been a partner at Raleigh Hand to Shoulder Center for more than two decades; the practice employs some 30 people, including physicians, nurses, occupational therapists and office staff.

As a private practice, Post and his partners have total control over who they hire and what kind of culture they want to promote.

"If patients have an issue with something in the office, it's not a system where, 'Well let me talk to the manager and let me get back to you,'" Post explains. "What we like is we're a small business here and you're building something together. There's a real sense of camaraderie and a community here, taking care of the patients. It's a joy."

But the business model to succeed - which sustains the livelihoods of the employees and keeps costs down for patients - continues to experience the peaks and valleys of an evolving health care industry in America.

"Think about this business model: you're having a fixed amount you're getting from insurance companies. It's either fixed or going down," Post says of insurance payouts. "You have increased expenses at the office, rent goes up, you want to give all of your employees raises. When what's coming in is fixed, the only way you can handle that is increase your volume, but that takes away from patient care. It really takes the fun out of being a physician when you're trying to run 30 to 40 patients through your clinic when it's more appropriate to see 15-20 in a day."

Another alternative - merge with another practice or with a hospital system. For now, though, Post says his partners don't want to give up their autonomy.

"If we join a hospital system, then the competition is gone," Post laments. "Let's say you're the only airline around. Is customer service going to be the most important thing? It will be less important if you're the only one around and the patient doesn't have a choice."

"We felt as if we would be left behind."

As partners at Raleigh Hand to Shoulder Center vow to remain independent, the data shows they are becoming the exception and not the rule - and not for lack of trying.

According to WakeMed, the number of physicians on its payroll has grown 65 percent in the last five years, and its current roster of medical staff includes 1,200 affiliated physicians.

UNC REX Healthcare, meanwhile, has experienced a growth at even more explosive rates: 11 practices to 95 since 2010 and hired physicians from 38 to 212.

Dr. Greg Hulka, an otolaryngologist at North Carolina Eye Ear Nose & Throat, tells ABC11 his partners consider their recent merger with Duke Health one of the "more difficult" decisions the practice has ever made.

"We felt as if we would be left behind," Hulka laments. "The choice of the patient isn't what it used to be. In years past there was a physician you wanted to go to and there was a good chance you'd just call up their office and go. Now you're driven more by the insurance company who is 'in-network,' and who is in-network through the health care systems. There are a lot of other forces that drive which physicians or practitioners you go see."

Hulka adds that being affiliated with a hospital system gives his practice "a seat at the table" when it comes to negotiations with insurance companies - negotiations that lead to contracts that set prices and payouts for patient visits and care.

"Hopefully patients won't see the change," Hulka says of his practice's joining Duke Health. "Our whole goal is to maintain the elements that have kept our practice different than surrounding practices."

The data on the effects of hospital system expansion is thin, and it doesn't help that the consolidation is happening so rapidly in a short amount of time. Indeed, the cost of health care is also a subject of immense disparity and nuance with variables related to private insurance, Medicare and Medicaid.

In a 2017 report submitted to Congress, the Medicare Payment Advisory Commission considers the impact of "provider consolidation" and finds that "prices tend to be higher in markets where physicians are consolidated into larger practices."

Regarding hospital systems, the report labels the expansion as "vertical consolidation" and the commission reviewed studies of some 6.4 million claims from a large private insurer. According to those studies, physicians at a hospital system earned a larger share of patient billings than physicians in private practice.

That trend, thus, led to higher commercial prices for patients seeking care from a hospital-owned practice versus non-hospital owned.

Though the report says the integration of hospitals and specialty practices "will create greater care coordination," the commission concludes vertical consolidation is instead leading hospital systems to use greater leverage to get more from insurance companies, which in turn raises prices on the policyholders.

"In the end, payment should depend more on the quality and efficiency of care provided by an organization's clinicians than the ability of an organization's legal staff to optimize its corporate structure" to increase revenue.

The I-Team reached out to all three of the Triangle's major hospital systems. Donald Gintzig, President and CEO of WakeMed, agreed to a sit-down interview with ABC11 at WakeMed's Cary Campus.

Gintzig, a retired rear admiral in the U.S. Navy, says he would rather people use the term "coordination" instead of "consolidation" when referring to the growing hospital system.

"Hospitals started 75 years ago for the most part around waiting for someone to get sick, but we're much more evolved and our role now is to keep you not needing healthcare," Gintzig explains. "A healthy person costs this country - not to mention being good for you - a lot less than if we wait until you're sick. So how do we partner with our physicians to be able to do that?"

Responding to the I-Team's questions, Gintzig flatly denied that WakeMed is actively seeking to acquire more practices and become the biggest provider in town.

"As a matter of fact we have physicians who want to come work for us but we are not aggressively going out and buying up practices in town," he explains. "We're trying to improve the health and wellbeing of the community and that involves growing around access and it involves moving care to a values-based setting."

"Part of the challenge is we're open 24 hours a day, seven days a week and we don't turn away anyone who walks through the door," Gintzig says (the report cited earlier in the article also mentions facility fees as reasons for higher prices). "We take everyone that walks in the door and we give care to everyone."

Alan Wolf, a spokesman for UNC REX Healthcare, echoes those sentiments in a statement to ABC11.

"The consolidation among health providers follows national trends that are being driven by a wide range of factors, including population health, an emphasis on prevention, and new models of care delivery."

"There are many benefits to patients," Wolf adds. "UNC Health Care's integrated network of care leads to higher quality, lower costs, more emphasis on prevention, wellness and education, and better coordination of care among primary care physicians, specialists and other clinicians."

Duke Health did not respond to ABC11's outreach.

There's still a choice in the Triangle

In conversations with patients, physicians and administrators, a recurring theme expressed to the I-Team is that competition still exists when there's more than one, and the Triangle is fortunate enough to have three major hospital systems.

"Physicians are driven to do their best work," Dr. James Post says.

"If you've got several health care systems in an area they're all going to be striving to provide very good care," adds Dr. Gregory Hulka. "We have that in this area."

The issues may be more significant in rural North Carolina where there is only one big player in town and it could be a long drive away.

Jonnell Prattis says she feels for fellow North Carolinians in that situation.

"I do have transportation. I have a truck. I have a vehicle," she says. "If someone has to catch the bus and that place is not on the bus line, they have to walk far away to get where they need to be. I've been in that situation."

As for how she'll navigate the Triangle health care marketplace, Prattis says she will still work hard to give herself options.