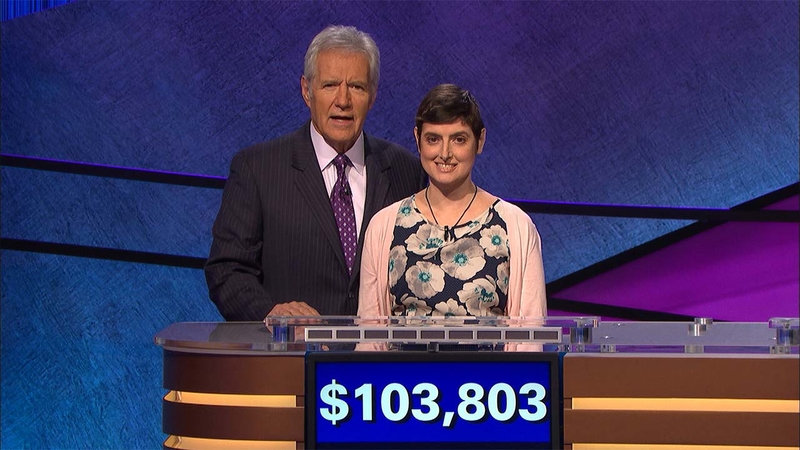 LOS ANGELES -- The Jeopardy! Tournament of Champions kicks off Monday night, and this year the show is paying a special tribute to Jeopardy! Champion, Cindy Stowell.

You may recall she died of cancer last year just days before her appearance on "Jeopardy!" aired. She won six contests in a row and more than $103,000, some of which she donated to cancer research.

The 41-year-old Texas woman taped the episodes in August and September 2016 while battling Stage 4 colon cancer. She died Dec. 5.

"Jeopardy!" says Stowell was sent advance copies of her first three episodes and watched them in the hospital. The show says it also expedited Stowell her prize money so she could donate some of it to the nonprofit Cancer Research Institute.

In her honor during the Tournament of Champions, Alex Trebek, the contestants, and the entire Jeopardy! staff and crew will be wearing ribbons and pins to raise awareness and funds for the fight against colon cancer while remembering an incredible champion.

In recognition of Stowell's achievement, Jeopardy! will donate $10,000 to the Cancer Research Institute in her memory.

You can donate too. Click here for more
Report a correction or typo
Related topics:
arts & entertainmentcancerjeopardy
TOP STORIES
Homeowners burn down house in attempt to get rid of snakes
Pedestrian killed on US 401 identified as Rolesville HS student
LIVE: Update on arrest of parents charged in Oxford school shooting
Tensions between US, Russia escalate ahead of Biden-Putin call
Money found inside megachurch walls possibly tied to 2014 theft
COVID-19 metrics climb after Thanksgiving but still far below 2020
Show More
Contact tracing revs up as omicron cases detected in several US states
Disney On Ice returns to Raleigh, Fayetteville soon
How unusual to charge parents in school shooting? EXPLAINED
Study suggests past COVID infection may not fend off omicron
Gov. Cooper receives trees, wreaths ahead of tree lighting
More TOP STORIES News