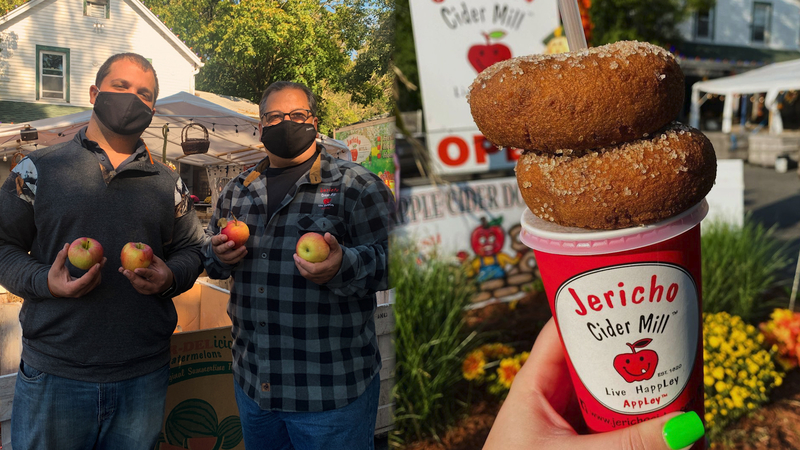 JERICHO, New York -- The historic Jericho Cider Mill is about to celebrate its 200th birthday this coming November.

Even though the mill has made technological updates throughout the years, they still like to create their products in an old-fashioned way and continue using the same authentic recipes.

"The Jericho Cider Mill gets approximately 40 to 45 bins of apples, said Ted Ketsoglou, Co-owner. "Each bin, holding approximately 800 pounds of apples. Throughout the day, we unload the truck, we'll bring them inside, and then we'll start to squeeze the apples on our press."

Behind the storefront where you can find baked goods and a variety of apples is a giant operation where the process of sorting, squeezing, and peeling occurs.

It's hard to believe that almost 20 pounds of apples make just one gallon of cider.

Related: Apple picking season has arrived and this farm is kicking it off with new safety rules

"What's great about it is the fact that we are now squeezing a fresh apple right out of the machine," said Ketsoglou. "People are getting fresh, fresh apple cider."

The cider mill gets its apples from the Hudson Valley, one of the major apple producing areas in the country. Once the good apples are sorted from the bad ones they are washed and loaded into the Willmes press.

The press dates back to the 1930s, it is still the only way the mill peels its apples by hand with a crank. Even though the process only allows for one person to use the crank at a time, the mill manages to keep up with all of its apple needs.

After they are peeled, they are grounded and pressed. The cider is then pumped into big tanks in the mill's attic. After settling and chilling, the cider is gravity fed into jugs which are refrigerated until sold.

In addition to their apple cider, the Jericho Cider Mill offers an array of baked goods, ice cream, and other apple products that fill the stories shelves from top to bottom.

You can even order a hot cider to-go steeped with cinnamon sticks or a frozen apple cider beverage to cool you off while the weather is still warm.