Raleigh parents know what Jimmy Kimmel is going through 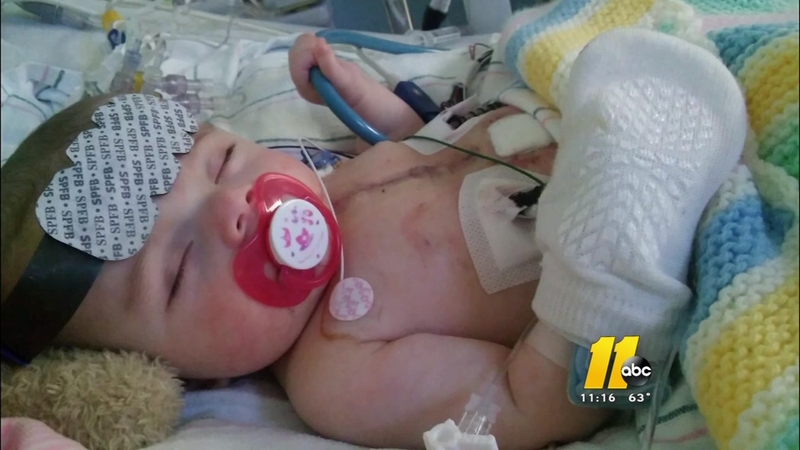 RALEIGH, North Carolina (WTVD) -- It's a side we rarely see of Jimmy Kimmel. The ABC late night host tearfully recounting a recent health crisis with his newborn son, Billy.

A Raleigh mom whose newborn is dealing with a similar health crisis says she was inspired to speak out after watching Kimmel's emotional message.

"I'm tearing up right now watching it, because it brings back so many emotions when the doctors told us about her," said Jennifer Brooks.

Three weeks ago, just like Kimmel's son, little Olivia underwent open-heart surgery to repair the hole in the wall between the lower chambers of her heart.

"Just having her surgery just now I know what (Kimmel) is going through," Brooks said. "I remember that day when that doctor came in and I knew something was wrong and the way she had to tell me my baby has heart disease."

TOF is very rare; about 1 of every 2,518 babies each year are born with it in the United States.

UNC Children's Hospital, where Olivia had her surgery, performed about 35 TOF operations in the past three years.

This north Raleigh mom and dad wanted to send a message to the Kimmels: "Hopefully reach out to other people that you're not alone out there. We fought through this. We got through this."

But the late night host also had a message for Washington as lawmakers debate a deal to repeal and replace Obamacare. Kimmel pleaded for them not to undermine the ban on discrimination against people with pre-existing conditions like Billy and Olivia.

Jimmy Kimmel shared a picture of his family, including his newborn son Billy who is recovering from open-heart surgery.

"It touched home that there is the chance that she will not have health insurance at some time because of her pre-existing condition and that she would have to suffer for that," Brooks said.

U.S. Rep. Robert Pittenger, R-NC, who represents the state's Ninth District, is a frequent critic of Obamacare. He released a statement Tuesday maintaining that healthcare reform will continue to offer protections for those with pre-existing conditions.

"The American Health Care Act absolutely does not eliminate protections for pre-existing conditions," Pittenger said in part. "The legislation does give states the flexibility to choose which solution is best for their unique circumstances. Current law remains in force unless an individual state chooses to serve those with pre-existing conditions through another risk-sharing or reinsurance program. Even then, those individuals cannot be charged more if they maintain continuous coverage."

In the three weeks since her surgery, Olivia is doing great. She has to go in for echocardiograms every four weeks. And she'll need another open-heart surgery at 5 years old, along with another procedure at 18 or so.

But that's the thing about the TOF; it is terrifying, but the survival rate is 98 percent.