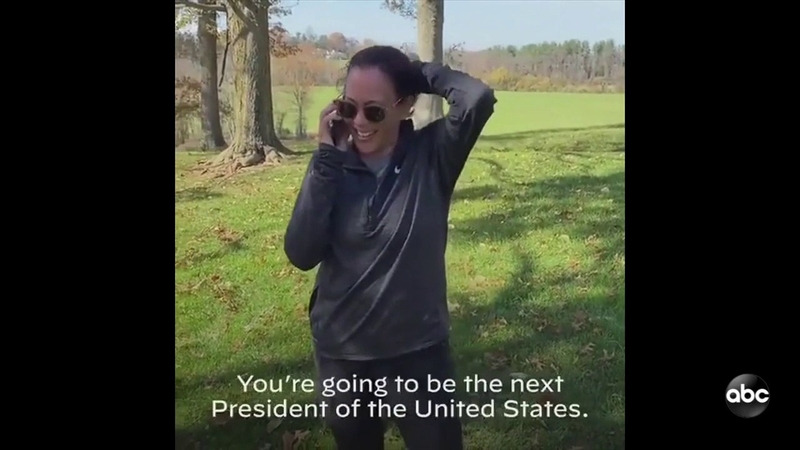 After news broke that Joe Biden had won the presidency, the nation was quick to react, with some posting to social media about their excitement and others wishing President Donald Trump a sarcastic farewell.

President-elect Biden addressed the nation in a tweet Saturday morning. He thanked everyone, whether they helped vote him into office or not.

"America, I'm honored that you have chosen me to lead our great country," Joe Biden tweeted Saturday morning. "The work ahead of us will be hard, but I promise you this: I will be a President for all Americans - whether you voted for me or not. I will keep the faith that you have placed in me."

America, I’m honored that you have chosen me to lead our great country.

The work ahead of us will be hard, but I promise you this: I will be a President for all Americans — whether you voted for me or not.

I will keep the faith that you have placed in me. pic.twitter.com/moA9qhmjn8

His wife, Dr. Jill Biden, shared this picture of the two of them holding a sign that reads, "Dr. and President Biden live here."

He will be a President for all of our families. pic.twitter.com/iGPKLMMIcK

Vice President-elect Kamala Harris responded to Biden's tweet saying she was ready to get started adding that "this election is about so much more than Joe Biden and me."

This election is about so much more than @JoeBiden or me. It’s about the soul of America and our willingness to fight for it. We have a lot of work ahead of us. Let’s get started.pic.twitter.com/Bb9JZpggLN

It appeared she was outside working out when she heard the news, and she immediately called Biden to share in the excitement.

We did it, @JoeBiden. pic.twitter.com/oCgeylsjB4

Her husband, Douglas Emhoff, shared an intimate picture of the two of them to Twitter letting her know how proud he is of her.

Harris makes history as she is the first Black and Asian woman elected vice president of the United States.

"We all know why Joe Biden is rushing to falsely pose as the winner, and why his media allies are trying so hard to help him: they don't want the truth to be exposed. The simple fact is this election is far from over. Joe Biden has not been certified as the winner of any states, let alone any of the highly contested states headed for mandatory recounts, or states where our campaign has valid and legitimate legal challenges that could determine the ultimate victor. Beginning Monday, our campaign will start prosecuting our case in court to ensure election laws are fully upheld and the rightful winner is seated. The American People are entitled to an honest election: that means counting all legal ballots, and not counting any illegal ballots. This is the only way to ensure the public has full confidence in our election. I will not rest until the American People have the honest vote count they deserve and that Democracy demands."

Trump tweeted, "I WON THIS ELECTION, BY A LOT!" before ABC News confirmed Biden's apparent win.

I WON THIS ELECTION, BY A LOT!

Congratulations to my friends, @JoeBiden and @KamalaHarris — our next President and Vice President of the United States. pic.twitter.com/febgqxUi1y

The voters have spoken, and they have chosen @JoeBiden and @KamalaHarris to be our next president and vice president.

It's a history-making ticket, a repudiation of Trump, and a new page for America.

Thank you to everyone who helped make this happen. Onward, together. pic.twitter.com/YlDY9TJONs

Clinton, who lost to Trump four years ago, urged Democrats to vote in "overwhelming" numbers in her remarks during the Democratic National Convention.

Former U.S. President Jimmy Carter also released a statement sending Biden and Harris a big congratulations from him and his wife.

"We are proud of their well-run campaign and look forward to seeing the positive change they bring to our nation," he wrote.

Politician Bernie Sanders also congratulated the two in this tweet.

I want to congratulate all those who worked so hard to make this historic day possible. Now, through our continued grassroots organizing, let us create a government that works for ALL and not the few. Let us create a nation built on justice, not greed and bigotry.

New York Governor Andrew Cuomo called this a historic day in a tweet.

After the darkness, division and hate of the past four years, America has spoken and rejected more of the same.

Politician Mitt Romney extended his congratulations by saying him and his family are praying that God blesses Biden and Harris in the years ahead.

Ann and I extend our congratulations to President-elect Joe Biden and Vice President-elect Kamala Harris. We know both of them as people of good will and admirable character. We pray that God may bless them in the days and years ahead.

A video of CNN host Anthony Kapel "Van" Jones went viral after he was seen getting emotional on live television about Joe Biden's victory.
"It's easier to be a parent this morning," he said. "It's easier to tell your kids that character matters. Tell them that truth matters, that being a good person matters. It's vindication for a lot of people who have suffered. The "I can't breathe," wasn't just George Floyd. It was a lot of people who have felt they couldn't breathe."

Van Jones was emotional talking about Joe Biden becoming the next President of the United States pic.twitter.com/KaqhSR4sHG

And it wasn't just political figures that shared in the excitement. Actors and professional athletes did, too.

My god it feels like I just took off a weighted blanket, unhooked my bra and taken out my extensions all at once

NBA Champion Lebron James wished Trump a goodbye in one of his many tweets this morning and thanked the people of Philadelphia for their votes.

The mayor of Paris, Anne Hidalgo, said Biden's victory symbolizes the need to act together more than ever in the following tweet.

Welcome back America! Congratulations to @JoeBiden and @KamalaHarris for their election! While we are about to celebrate the 5th anniversary of the Paris Agreement, this victory symbolizes our need to act together more than ever, in view of climate emergency. 🇺🇸#Election2020