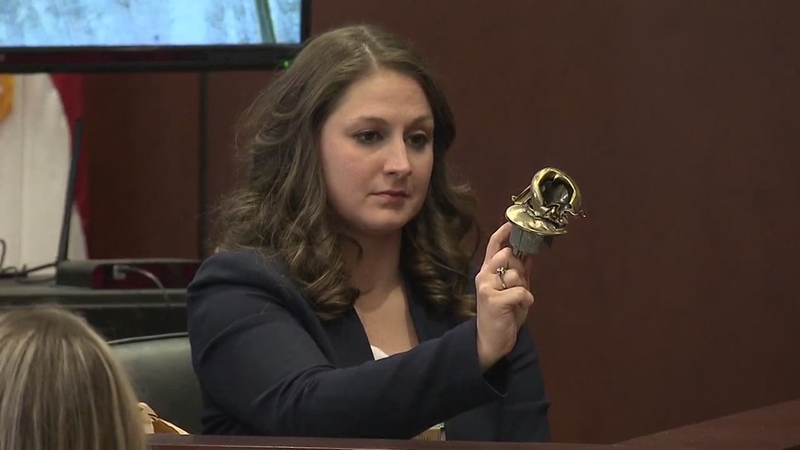 RALEIGH, N.C. (WTVD) -- A crucial day for prosecutors was a gruesome day for jurors in the capital triple-murder trial of a Wake County man.

Jurors watched as a crime-scene investigator used diagrams and photographs to guide them through the site of the carnage -- the home of the Mazzella family in the Clear Springs subdivision near Wake Forest.

The pictures of the victims who were killed with a shotgun were so horrible the patriarch of the Mazzella family, Sal Mazzella, who escaped the carnage couldn't bear to see them and left the courtroom.

Jurors were also shown pictures of the door leading from the garage into the home.

The doorknob and deadbolt were missing.

A crime-scene investigator opened a paper bag and pulled out the mangled knob from the door.

That evidence bolstered the prosecution's contention that the terror began when Jonathan Sander blasted his way into the home.

Jurors were presented with that theory during earlier testimony.

"The defendant took a loaded shotgun, walked from his house on Clearsprings Drive next door to the house in which the Mazzella family lived, used that shotgun to shoot into the house, make his way in," prosecutor Stacy Newton told jurors in opening statements.

And since then, there has been testimony from a neighbor who said she saw Sander walking with a shotgun from the Mazzella home back to his house next door.

The Sander and Mazzella families were close friends and business partners for years.

Late Thursday, a customer of their landscaping business testified that the relationship between the families began to sour in late 2015.

Then in March of 2016 when a juvenile member of the Mazzella family accused Sander of molesting her, the violence erupted.

Sander's attorney told jurors during opening statements that he denies shooting anyone and will testify to that.

The trial began Monday and was marked by a dramatic courtroom outburst.

While Sal Mazzella was testifying, Sander jumped up in court and started yelling.

As deputies led him from the courtroom Sander said, "You killed your family and you're going down for it!"

The judge warned him that another outburst could get him permanently ejected from the courtroom and there hasn't been one since.

Tuesday was more subdued, as prosecutors played 911 calls from the night of the crime.

Wednesday included dash cam audio where Sander told investigators he was "a dead man" and testimony about the shotgun investigators said Sander used to commit the murders.

Sander's defense team said he admits to touching the weapon, but he did not shoot anyone. Sander is expected to say that when he takes the stand in his own defense, perhaps sometime next week.
Report a correction or typo
Related topics:
wake countyraleighwake foresttrialmurdertriple shootingcourtcourt casehomicide
Copyright © 2022 WTVD-TV. All Rights Reserved.
TOP STORIES
Gas prices decline in Raleigh but experts worry about meaning of dip
Sticker shock for young would-be renters as apartment leases spike
Large police presence on Shanda Drive in Raleigh
Man dies hours after shooting at Raleigh gas station
Grandfather of woman shot by Fayetteville police searches for justice
What to know if your flight gets canceled or delayed
Raleigh City Council adopts 'social districts' ordinance
Show More
Raleigh woman recovering, arrest made in San Diego shooting
Couple fined $1,500 for parking in own driveway
Creedmoor rallies around family that lost everything in house fire
DHS warned of 'heightened threat environment' before parade shooting
Parents of late NFL star Demaryius Thomas reveal he had Stage 2 CTE
More TOP STORIES News