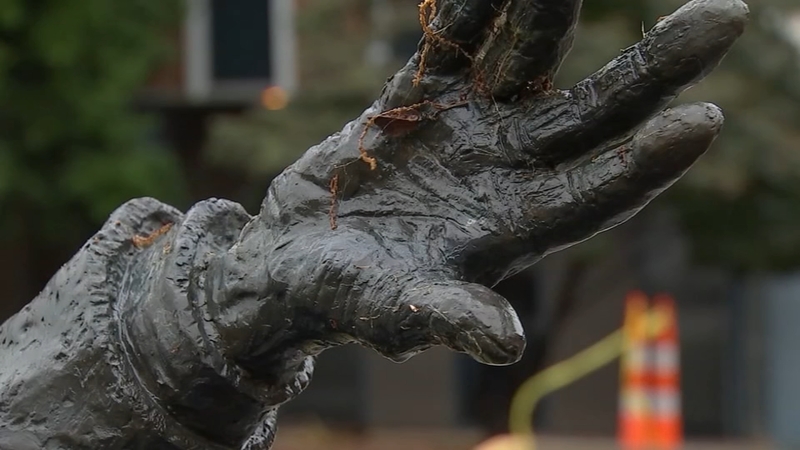 RALEIGH (WTVD) -- A Raleigh statue of a white supremacist was taken down Tuesday morning just before daybreak.

According to our newsgathering partners at the News & Observer, Daniels' great-grandson drove to Raleigh from his Nashville, Tennessee, home to see the removal of the statue.

"The time is right," Frank Daniels III said. He told the News & Observer his family had received no threats or pressure from activists to remove the statue. He said the family planned to keep the statue in storage until it could be displayed on private property.

"We all have things that we've done that are regrettable. His, the thing that we regret about his past, is something that becomes increasingly indefensible," Daniels III said.

Daniels III said he and his family did not see this as a sad day.

"We did not want Josephus to be a symbol of that racism. We want the family to be more involved in racism and equity for all people," he said.

Frank A. Daniels Jr., a retired publisher of the News & Observer, released the following statement about removing the statue:

"In the fall of 1984, the Daniels family commissioned and placed a statue of Josephus Daniels in a public park across the street from The News & Observer to acknowledge his role in creating one of the nation's leading newspapers.

This morning we removed the statue from Nash Square. We have placed it in storage until we can find a suitable location on private property.

Josephus Daniels' legacy of service to North Carolina and our country does not transcend his reprehensible stance on race and his active support of racist activities.

In the 75 years since his death, The N&O and our family have been a progressive voice for equality for all North Carolinians, and we recognize this statue undermines those efforts."

Josephus Daniels, a prominent Democrat who later served as Secretary of the Navy, gained control of the News & Observer in the 1890s. He used the paper to promote white supremacist ideals.

He and his publication are cited in a government-sanctioned report as being directly involved in the Wilmington Massacre of 1898. That is an event in North Carolina history noted by historians as a major turning point in Reconstruction but often left out of mainstream history classes.

Years after the Wilmington Massacre, Daniels, a Democrat, supported Woodrow Wilson in the 1912 presidential election. When Wilson won, Daniels was appointed Secretary of the Navy, which he led through World War I. He left government life in 1921, returning to the News & Observer, which was family-owned until it was sold in 1995.

Wake County Public School System has a middle school named after Daniels: Daniels Magnet Middle School. WCPSS Board Chairman Keith Sutton recently said he supported changing the school's name, and vowed that the school board would discuss the matter soon.