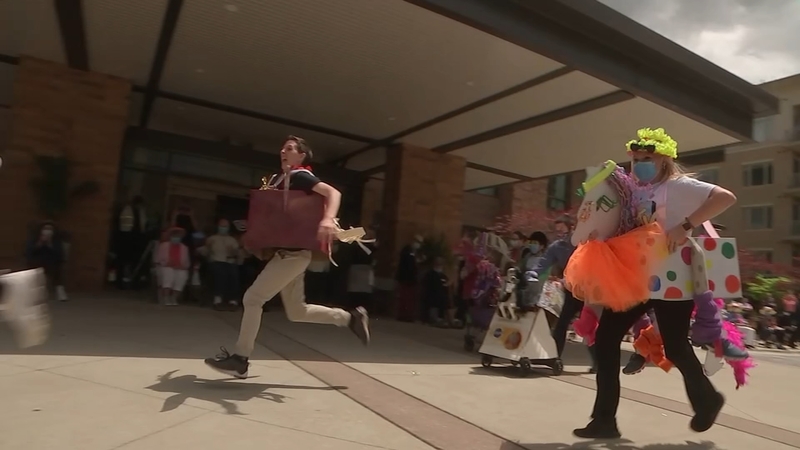 RALEIGH (WTVD) -- There will be no Kentucky Derby this May but that doesn't mean the fun has to stop for one senior living community in Raleigh. The facility is inviting residents out on their balconies for a front-row seat at the very first Cardinal Derby.

"It was pretty much a CLA project that I wanted to have everyone dress up and have their best dress and best outfit best hat," said Lauren Grey a member of the wellness team at the Cardinal. "It turned into since we're not having our Kentucky Derby this year how about we go all out with the Cardinal Derby."

The Cardinal at North Hills challenged its staff to race on their own. Eight "horses" competed with Curls and Crunches taking home the trophy.

"It was great," said Executive Director Tom Ford. "I think it was something that we've never done anything like this. I think it took them by surprise that we went through this much effort and it's just fun to see them laugh."

Ellen and her husband John have been quarantined along with other residents at the Cardinal for 8 weeks now. They say the toughest thing is not being able to see their son.

"I do a lot of reading," said John Czinege. "I work on the computer a while."

"Read," Ellen added. "We go out and walk in the hallways."

The Cardinal staff says this time has allowed them to be creative and come up with ideas like the derby for residents to have a good time will still staying safe and socially distant.

"We're very committed to making it an overall great quality of life," Ford said. "Certainly interacting, meeting and talking is important so it's frustrating to us but at the same time we know their safety is in mind."

"To see them smile and to come out is absolutely heartwarming," said Gray. "We try our best to do anything and everything to make them have an awesome experience here and to just enjoy living here every single day."