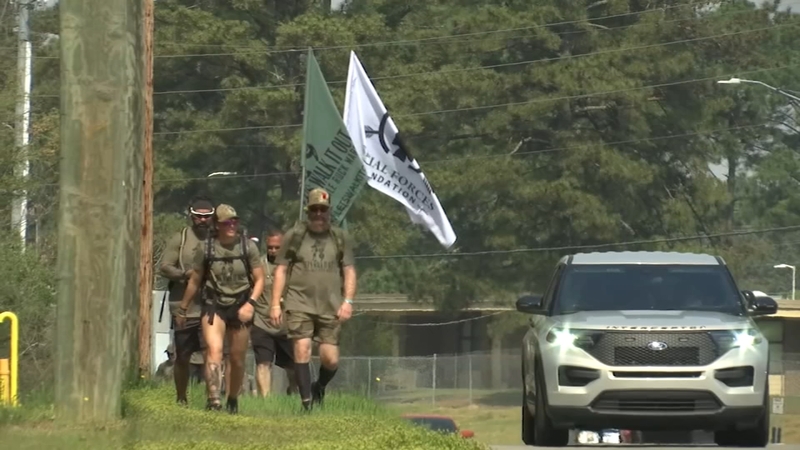 FORT BRAGG, N.C. (WTVD) -- A group of veterans and active service members are marching to Camp Lejeune as a way to bring awareness to mental health within the military and first responder community.

The event, known as "Let's Walk it Out: 222+ Mile Ruck March" started on Thursday morning. As stated in the name, the group will walk 222 plus miles from Fayetteville to Jacksonville and back.

Tizoc "TJ" Jaimes, one of the organizers of nine-day march, will be one of five people making the entire trek.

"We're going highway 24 all the way there and back. We do have locals coming out, we have people who have signed up to do portions of each leg," Jaimes said.

The "Let's Walk it Out" event aims to educate on the importance of talking about mental health, including suicidal thoughts and post-traumatic stress.

"It was really heartbreaking when I found out the news that he took his own life," Peterson said.

Peterson, during the initial portion of the march, brought with him his "Flag to Remember" which had the names of Watson and others who lost their lives to suicide or in the line of duty.

By bringing this flag with him to every event, Peterson says he's making sure those names continue to be honored, "to me, this walk is supposed to...it kind of gives us a chance to feel, um, feel what the others have felt - which is alone."

The 222 miles represent the 22 veterans who take their own life on a daily basis. Jaimes tells ABC 11 it's also a symbol of change.

"We're going to put ourselves through some physical pain and try to help out other people who are going through some mental pain," Jaimes noted.

All of the proceeds and donations collected from this event will go towards tearing down stigmas behind mental health and providing resources to others in need.

"These type of events are temporary, but this flag and the message that comes with it, that's a permanent solution that needs to be addressed," Peterson said.

If you would like to donate to the cause or keep track of the group's march, you can go to the "Let's Walk it Out" website.