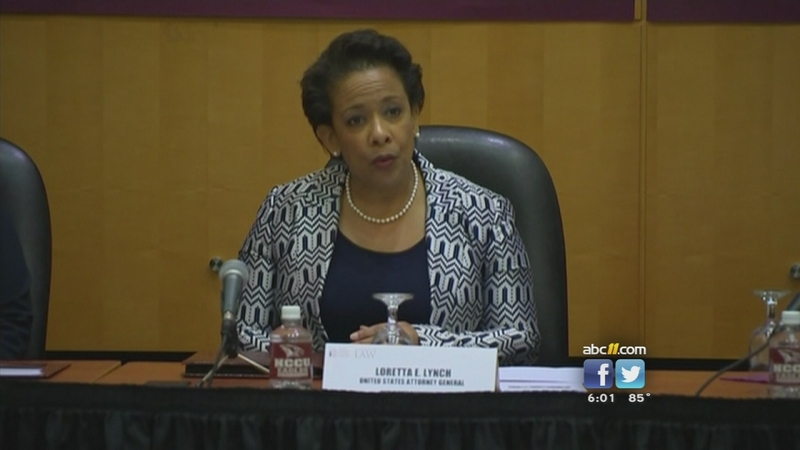 DURHAM (WTVD) -- U.S. Attorney General and Durham native Loretta Lynch made a trip back to the Triangle on Wednesday, the first since her historic confirmation.

Lynch made two stops, one in Raleigh and one at North Carolina Central University's campus.

After a warm welcome from community and civil rights leaders at NCCU, Lynch tackled the controversial issues facing the nation.

"Hate crimes themselves are the original domestic terrorism," Lynch said.

Lynch commented on racially-charged events and civil rights issues during her visit to the Triangle.

"We don't really have the definitive answers on how all those were started, but we're looking very seriously at them," she said.

Lynch addressed the racial climate and community fears, especially at places of worship.

"I understand that people are concerned but I certainly would hope they would not let fear overcome their connection to their houses of worship, because those are so important to the community," said Lynch.

In her first official visit to the Triangle, Lynch received a sincere welcome from the Bull City.

"I do want to let everyone in Durham know it really was wonderful to have the support of home," she said.

Her homecoming came just as she launches a federal investigation into the Charleston church shootings and investigators grapple with recent church burnings.

"There are, in fact, trying times... events traumatizing people of color, houses of worship... these issues still haunt us," said Lynch.

In Raleigh, members of the North Carolina Coalition against Human Trafficking joined Lynch and Eastern District U.S. Attorney Thomas Walker for a discussion on efforts to pursue and prosecute human traffickers.

Lynch called it the "invisible crime," citing recent arrests in Wake County and efforts to help some of the victims, some of them children.

"So often people fall into this, into the clutches of traffickers because they are vulnerable, they are lost, they are disconnected," Lynch said. "And so we have to look at the prevention efforts that groups such as this are doing...as well the efforts you're making with survivors to reconnect them."