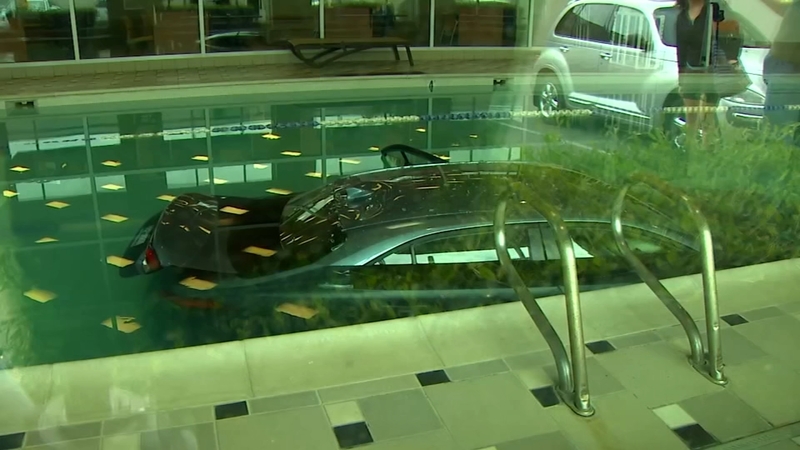 SEATTLE -- A Seattle man is being called a hero after he helped save a 69-year-old driver who crashed through the glass wall of an LA Fitness center -- the car landing in the middle of the swimming pool.

"This thing came crashing down on the left side of me. I thought somebody had thrown a deck chair in," said Noah Schlenk.

Schlenk, who says he also works as a lifeguard, was in the pool with two other people at the time of the crash.

"My first instinct was like, 'Oh my God! There was someone in that lane' and to make sure that person is not under the car," said Schlenk.

Thankfully no one was trapped under the car, so he and another swimmer moved quickly to help the driver who was still sitting inside.

"We opened the door and we're like, 'Hey --you got to get out, you got to get out!' And he just kind of looked at us and he still wasn't quite understanding where he was," said Schlenk. "So, the guy I was with actually just came in and reached over and grabbed him and pulled him out."

After everyone was safely out of the water, two tow drivers showed up and actually had to get in the pool to figure out how to secure the car.

It took about 30 minutes to hook up tow truck cables to the car, get it out of the pool and back through the window.

"I've never done anything like this but I've been in situations just as bad as this one," said Irvin Escalante, a driver with Dick's Towing.

The LA Fitness closed its doors temporarily as the car was pulled from the water but planned to reopen the rest of the gym later that afternoon.

A spokesperson for LA Fitness said they'll investigate the incident and make sure the pool area is safe before allowing it to be used again.

We talked to a few gym members who say although it was somewhat inconvenient to not be able to work out, they are just happy that everybody got out safely.