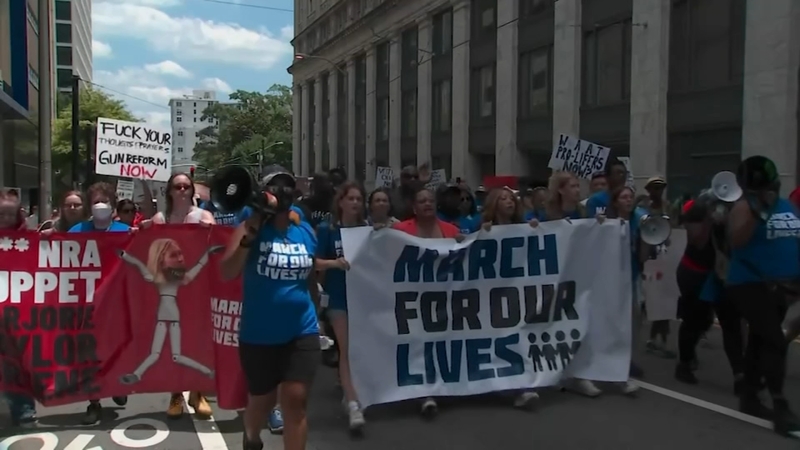 RALEIGH, N.C. (WTVD) -- Thousands of people across America, including in Washington D.C. were saying "Enough is enough" Saturday after gunfire killed more children. There are more than 400 demonstrations, organized by March for Our Lives.

The organization was formed by survivors of the Marjorie Stoneman Douglas High School Massacre in 2018. The gunman that day was only 19 years old.

"I'm now 18 and unfortunately, I've been in this fight my whole high school career. And I chose to miss some graduation festivities because some students are missing the rest of their lives," March for Our Lives Organizer Laura McDow said.

Like the group of survivors that formed after the shooting in Florida, this rally was also organized by students. Adults came too, horrified by the deaths of fourth-graders in Uvalde, Texas, at the hands of another teenage shooter.

She and her husband are preparing for the birth of their first child, due in eight weeks.

Signs held by many blame the NRA and politicians who send thoughts and prayers without legislative action.

"I cannot vote until next year, but I hope that by the time I can, I won't be able to buy a rifle. No more thoughts and prayers. We need action now.," Ashley Ju, Cary March for Our Lives said.

Similar words were spoken in rallies in Raleigh and across the country, in hopes that it will spur elected authorities into action. The people who organized the rally say if it doesn't happen, there will be consequences at the ballot box.