Thousands take part in Triangle March for Our Lives rally 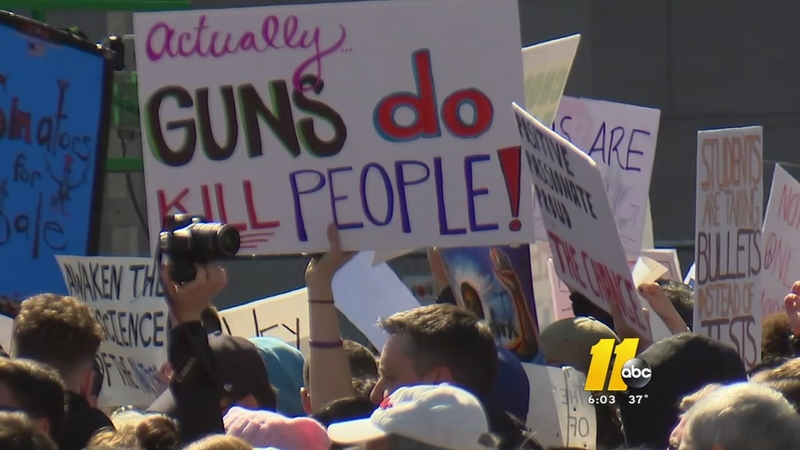 March for Our Lives in Raleigh and Durham

RALEIGH, N.C. (WTVD) -- The massive movement -- March for Our Lives -- happened all across the country on Saturday, including here in the Triangle.

Raleigh and Durham both participated in the march -- Raleigh's event started at 10 a.m. and Durham's began at noon.


PHOTO GALLERY: March for Our Lives all over the world

But even before the Raleigh march began, you could hear individual voices echoing the thoughts of many, such as the sentiment voiced by one high school student: "I just think I shouldn't have to go to school fearing for my life every single day That's very upsetting,"

The March for Our Lives Rally marches on the N.C. Capitol grounds, Saturday, March 24, 2018.

Aaron Wolff was a Virginia Tech student hiding in a campus building the day a gunman killed 32 people there.

"At the time, in 2007, that was the largest mass shooting in US history and in the past two years, said Wolff, who is now a veterinarian. "That record has been eclipsed twice, in Vegas and in San Bernardino. To say I'm sick of it is an understatement."

Wolff spoke to the crowd when it reached Halifax Mall, telling the audience that 10 years after he hid in a basement on the Virginia Tech campus, his elementary school daughter is getting Code Red drills, learning what to do in case another armed gunman invades her school.

He and others said that's not acceptable.

"I did not sign on to be a police officer, to be a prison guard or to be a soldier," said Del Lancaster, a Wake County kindergarten teacher: "The only thing giving a teacher a gun does is put more money in the pockets of gun manufacturers."

In Durham, one of the highlights of the many speeches was the impassioned plea by fifth-grader Jack Zavaleta. Take a look below:

Fifth-grader Jack Zavaleta gave an impassioned speech Saturday at the Durham March for our Lives rally.

Meanwhile, hundreds of thousands of teenagers and their supporters rallied in the nation's capital and many other cities across America on Saturday to press for gun control in one of the biggest youth protests since the Vietnam era.

"If you listen real close, you can hear the people in power shaking," David Hogg, a survivor who has emerged as one of the student leaders of the movement, told the roaring crowd of demonstrators at the March for Our Lives rally in Washington.

Chopper11 HD over Durham March for Our Lives

He warned: "We will get rid of these public servants who only care about the gun lobby."

Chanting "Vote them out!" and bearing signs reading "We Are the Change," ''No More Silence" and "Keep NRA Money Out of Politics," the protesters packed Pennsylvania Avenue between the Capitol and the White House.

Large rallies with crowds estimated in the tens of thousands in some cases also unfolded in such cities as Boston; New York; Los Angeles; Chicago; Houston; Fort Worth, Texas; Minneapolis; and Parkland, Florida, the site of the Feb. 14 attack at Marjory Stoneman Douglas High School that left 17 people dead.