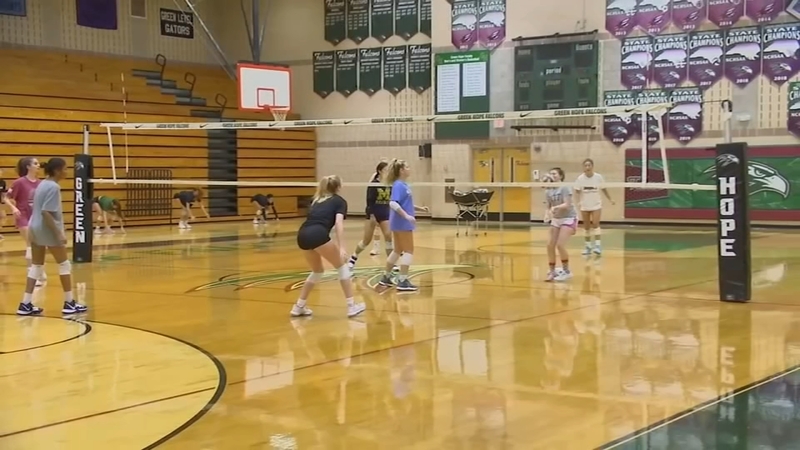 RALEIGH, N.C. (WTVD) -- The most recent COVID-19 update from the North Carolina High School Athletic Association requiring all athletes, indoors or out, to wear masks is raising concerns from athletes and parents.

"I asked him about it when he came home from practice yesterday and he said absolutely it was difficult," said Beth Roach, a Wake County parent. "Everybody was complaining about it. Everybody was pulling down their mask to get the fresh air at the end of a wind sprint. I said 'well, were you close,' and he said, 'no we were making sure we were spread out and six-feet apart.' I think we're introducing a new medical risk in a situation that does not need to be introduced."

The current CDC guidelines suggest masks should be used in public settings but if you're unable to wear a mask because of difficulty breathing during high-intensity activities, then you should choose a location with greater ventilation and air exchange -- such as being outside.

Gov. Roy Cooper's executive order does not mandate masks to be worn outside while exercising if social distancing is possible.

Roach, whose son is a soccer player, said her son has asthma. She said the new rule makes it hard for her son to breathe, but she doesn't want this to take away from his final season.

"My son is a senior," she said. "This is his pinnacle moment of high school. He is graduating. He won't have an opportunity to play for the high school again, so he would really like to play. I'm struggling as a parent because he is playing a sport that's outdoors and that sport in my mind should be able to be played because of the proper ventilation without a mask on. It is a very tough choice for us."

Tammalyn Thomas-Golden is also a Wake County parent to a senior. Her daughter plays volleyball, which is played indoors, and she understands the importance of wearing a mask while exercising.

"It's important for her to be able to play, so if she has to wear a mask she's going to do it because she just wants to play one more time with the girls," Thomas-Golden said.

"If you get one or two kids who test positive, they shut it down," she added. "The whole team suffers so is the inconvenience of the mask? Absolutely. Does that mean if we don't wear it we can't play? Which do I want? I think most kids would say I'll wear the mask."

When asked about the issue The North Carolina High School Athletic Association issued the following statement:

"Our Sports Medicine Advisory Committee and our Board of Directors feels that if this is what the Governor and DHHS is requiring at this moment, the benefit of participation outweighs the negatives and risks associated with mask coverings during competition for those in season sports. Further decisions are to be made for sports that are upcoming."

Dr. Graham Snyder, an emergency medicine physician at WakeMed, said he thinks the risk to young athletes is low.

"The real risk to an individual young athlete of exercising at moderate intensity with a mask is relatively low," Snyder said. "It's definitely not as comfortable, it's definitely going to limit their performance somewhat. If they're going all-out then there's going to be a little less oxygen, so they're not going to be able to perform at the same level of intensity."

Snyder said wearing a mask while exercising doesn't damage the lungs and only becomes a concern with the sweat if the mask isn't properly cleaned.

"It's very unlikely that a healthy athlete would literally pass out or asphyxiate from a mask," he added. "It's hard to imagine a medically plausible reason for why that would happen. What they would do instead is feel like they couldn't breath, feel like they were out of breath, which would force them to slow down. "