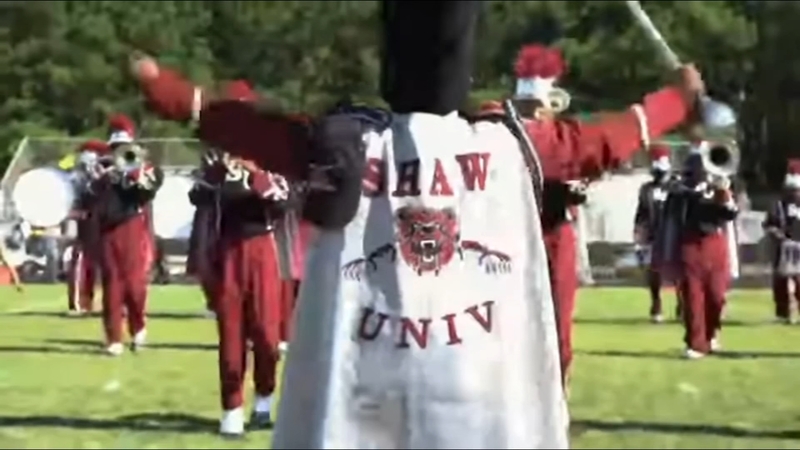 McDonald's features Shaw U in commercial, donates $100k for band

RALEIGH, N.C. (WTVD) -- You may have seen McDonald's' newest commercial. In a national campaign, the fast-food giant featured the first and oldest Historically Black College and University in the South -- Shaw University.

"Legacy is such a big deal at our school. For me to be able to follow in the same footsteps of my mother, my aunties and uncles, it's such a big deal," said Dave Walters Jr., a sophomore student and member of the band.

Walters, a legacy student, plays the alto saxophone. He is grateful to walk the same halls as his family members.

"I would have never expected to see myself on national television by way of my son. I'm humbled and excited," said Dave's mother, Vanessa Barnes-Hammond.

McDonald's also gifted the HBCU with a $100,000 donation. It's a contribution that band director and Shaw alumnus Andrae King said will help move the program forward. They have purchased new uniforms and instruments.

"So when you see us in the Raleigh Christmas Parade or any public event, anywhere the band is represented, being able to have this type of funding, it just reflects the quality education we're able to offer students here at Shaw," King said.

According to King, Platinum Sound celebrates its 20th year in 2022. Although there are only 50 students in the band, the director is certain that interest will grow.

"When you have new uniforms, you feel better about yourself and the program," Walters said. "You take more pride into what you're doing on the field. I think it's needed for the boost and confidence. It's also needed for the look -- the style."
Report a correction or typo
Related topics:
societyraleighcollege studentsmcdonald'ssee it on tvbandshaw universitycommercial ad
Copyright © 2022 WTVD-TV. All Rights Reserved.
TOP STORIES
Death toll rises to 21, mostly children, in TX school shooting
Triangle activists, law enforcement react to deadly Texas shooting
Southern Baptist Convention to release list of clergy sex abusers
Uvalde school shooting: What we know about 19 kids, teacher killed
Plans revealed for new development where circular Raleigh hotel stands
A look at some of the deadliest US school shootings
Entrepreneurial Fayetteville sisters honored with Key to the City
Show More
Camp Lejeune warns people of explosives-filled beach area
Canes fall 4-1 in New York; series tied at 2
Johnston Co. dad starts Facebook group to help families find formula
Biden says 'we have to act' after Texas school shooting
1 dead, brother still missing in Cape Fear River
More TOP STORIES News