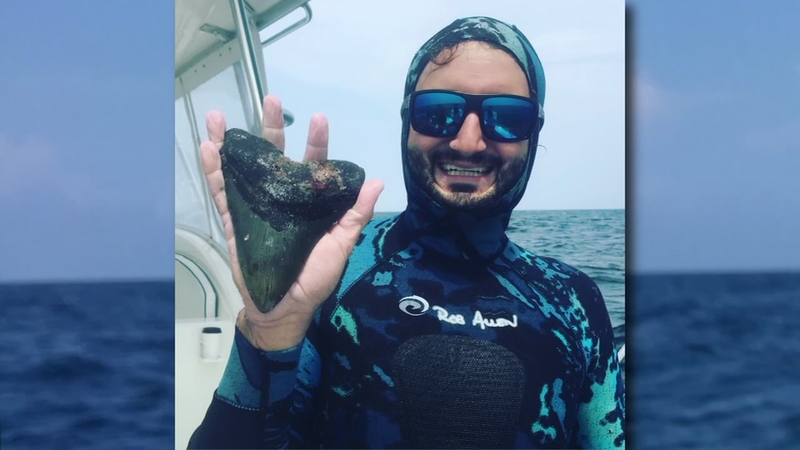 Hunting for Megalodon teeth in NC

RALEIGH, N.C. (WTVD) -- Researchers from North Carolina State University and the North Carolina Museum of Natural Sciences believe they've gotten down to the root of the mystery surrounding a deformed tooth from a megalodon shark.

If you don't know how big a megalodon shark was back in the prehistoric days, scientists say the apex predator was the size of a school bus.

North Carolina is a hotbed for people searching for megalodon teeth. Whether diving off the coast or sifting through old mines, megalodon hunters flock to North Carolina regularly.

One such tooth had scientists stumped. It was 4-inches in size and had a split down the middle. Scientists from NC State wanted to know what caused that split.

They compared the tooth to modern sharks and eventually figured it out.

"Based on what we see in modern sharks, the injury was most likely caused by chomping down on a spiny fish or taking a nasty stab from a stingray barb," NC State doctoral student Haviv Avrahami said.

"We also know that (Otodus) megalodon had nesting grounds around Panama, and that relatives of modern stingray species also inhabited that area," researcher and NC State graduate Harrison Miller said. "And these spines can get very thick. So a tooth injury of this type could indicate that megalodon was more of a generalist predator - and that this megalodon in particular just had a bad day."

Lindsay Zanno, head of paleontology at the N.C. Museum of Natural Sciences, agreed with the findings.