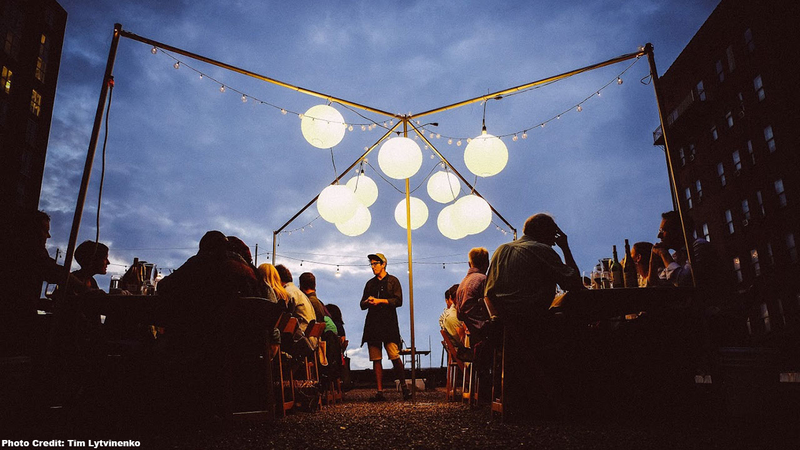 At the end of January, Snap Pea Catering and Underground released tickets for their March dinner. The tickets sold out in four minutes.

"The past year or so they've been consistently been selling out in four or five minutes," explained executive chef and owner Jacob Boehm.

"Of course, it depends on how many tickets are available and how many nights we are doing, but generally four or five minutes," Boehm said. "People come to the dinners and they say, 'Woah!'"

Boehm is the creative force and self-taught chef behind the surprise monthly dinner events. They are pop-up as the menu and location change with every dinner. Ticket holders find out 36 hours before the event where the location will be.

"The only thing you know when you purchase tickets is the general area of the Triangle where it's going to be," he said.

The pop-up idea came to Boehm when he moved back to Chapel Hill where he grew up. After finishing college at Stanford and working for some chefs on the west coast he started Snap Pea Catering and Underground in North Carolina to create something different.

"At Stanford, I studied Music, Theatrical Lighting Design, and Computer Science," he said. "The whole idea is to create a broader experience or performance, if you will."

So, Boehm created his first event.

"Many people had never heard of the pop-up dinner at all but over time as word of mouth spread it got increasingly popular. Now, we've been doing them for two and a half years where we just sold number 27 and we could not produce them quickly enough to meet the demand."

He has hosted dinners in the Morehead Planetarium, PlayMakers Repertory Company in Chapel Hill, on the banks of the Haw River, the rooftop at Citrix in downtown Raleigh and inside the Raleigh Denim workshop.

The process of planning this type of event takes Boehm about six months once he has pinned down a location. Some dinners are three nights in a row. Others are only a one-night event. It depends on the availability of the location. Boehm says he sells up to 60 tickets a dinner depending on the space.

Each dinner is inspired by the location it is in. Boehm uses seasonal and locally sourced food creating a meal that weaves the story of the surroundings into the meal.

"You can take a look at menus of past events on our website, but you have no idea what it's going to be and that's really important because it opens people's eyes up to foods they might have thought they didn't like or had never heard of. But here, they're being put down in front of them and they're giving it a try."

If you would like to give one of the pop-up dinners a try, tickets go on sale for the next event March 17, 2017.