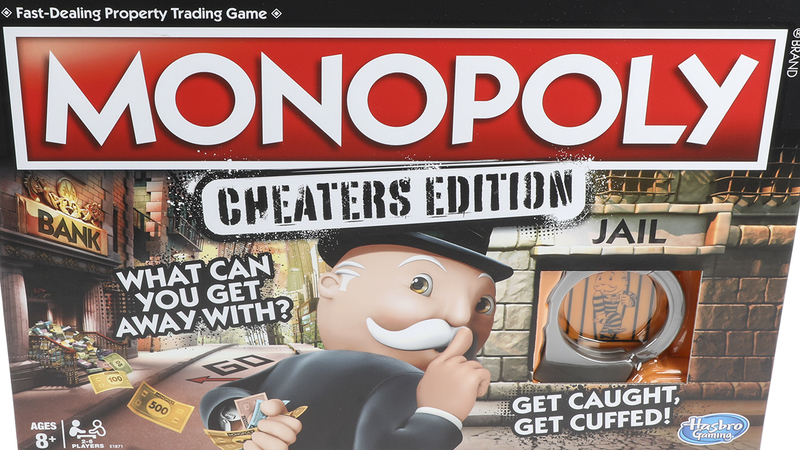 This new version of Monopoly rewards you for cheating

If you've ever pocketed a little extra cash from the bank or failed to pay rent while playing Monopoly, you aren't alone - and there's a new version of the classic game that you'll probably like even better than the original.

Hasbro has unveiled Monopoly: Cheaters Edition for those who think rules are made to be broken (and according to Hasbro's own research into playing habits, more than half of players admit to cheating).

In the new version, players see what they can get away with without their fellow players noticing. A set of 15 Cheat Cards encourages players to covertly bend the rules by doing things like moving more spaces than they've rolled along the board.

Cheaters Edition also does away with the designated banker, leaving players charged with the responsibility of doling out cash for themselves using the honor system - or the dishonor system, in this case.

If you successfully pull off the cheat outlined on the card, you're entitled to a reward like extra money from the bank or a free hotel.

But those who are caught cheating must pay the price by heading to jail and being physically handcuffed to the gameboard. The only way to get out of jail is to pay your way back into the game or wait for another player to be sent to the slammer.
Report a correction or typo
Related topics:
societywhat's trendinggamesbuzzworthyhasbrofun stuffu.s. & worldtoys
Copyright © 2022 WTVD-TV. All Rights Reserved.
TOP STORIES
Witness: Trump grabbed steering wheel, wanting to go to Capitol | LIVE
Durham launches program to help people with mental health issues
Why you should pay down your credit cards right now
ACC changing scheduling model for football in '23 and beyond
Airbnb makes global party ban permanent, saying it works
Grandmother of Uvalde school shooter released from hospital
Nazi convicted: Former SS guard, 101, jailed for aiding murder
Show More
2 Raleigh women shot while on business in California
Teen charged in shooting that injured Goldsboro 3-year-old
Daily Harvest responds after customers sickened, hospitalized
ABC11 to present Raleigh's July 4th fireworks show at Dix Park
Wake County man wins more than $200K in NC Lottery
More TOP STORIES News