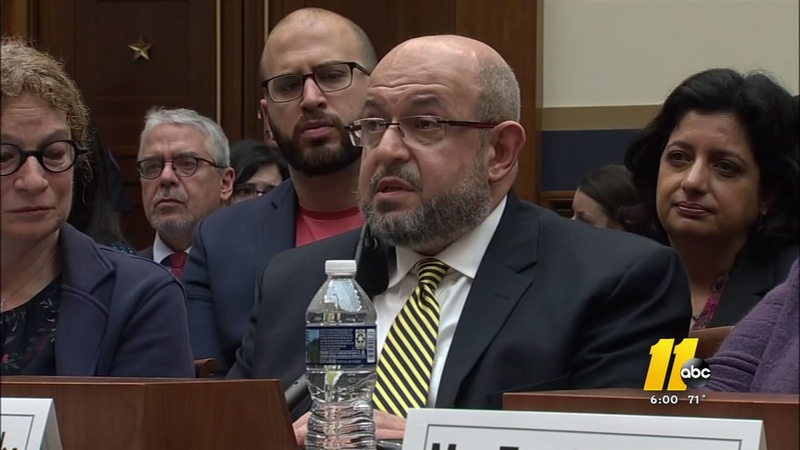 DURHAM, N.C. (WTVD) -- There could soon be a trial in the murder case involving three Muslim college students.

A hearing will take place Thursday at the Durham County Judicial Center to discuss moving it closer to trial.

On Tuesday, the father of two of the victims pleaded with members of Congress to keep families safe.

"I am afraid for our country," said Dr. Mohammad Abu-Salha at a House Judiciary hearing on Hate Crimes and White Nationalism. "Please remember them: Deah, Yusor and Razan. They are all my children and they are gone."

On Feb. 10, 2015, Deah Shaddy Barakat, 23; and his wife Yusor Mohammad Abu-Salha, 21 were shot and killed inside their apartment in Chapel Hill in the 200 block of Summerwalk Circle. Also killed there was Yusor's sister, Razan Mohammad Abu-Salha, 19, of Raleigh.

During the hearing, Abu-Salha told the committee that four years after their shooting deaths, he is still haunted.

Several of the members' faces revealed shock and concern as Abu-Salha described how the three were killed.

"We miss our children so much," said Abu-Salha, who also said his daughters told him the suspect ranted that he hated the way they looked and dressed.

Before their deaths, Deah and Yusor had only been married six weeks.

"There's no question in our minds that this tragedy was born out of bigotry and hate," Abu-Salha said.

According to the FBI's latest statistics, hate crimes are up 17 percent.

Although the feds investigated the students' murders for a possible hate crime, right now Hicks is not facing hate-crime charges.

The House Judiciary committee, which oversees the Department of Justice is coming face-to-face with families torn by violence who are asking for help.

"I plead to you not to let another American family go through this because our government will not act to protect all Americans," Abu-Salha said.

It's not clear why it's been four years and the suspect has not been prosecuted.