Chapel Hill vigil calls for end to genocide in Myanmar 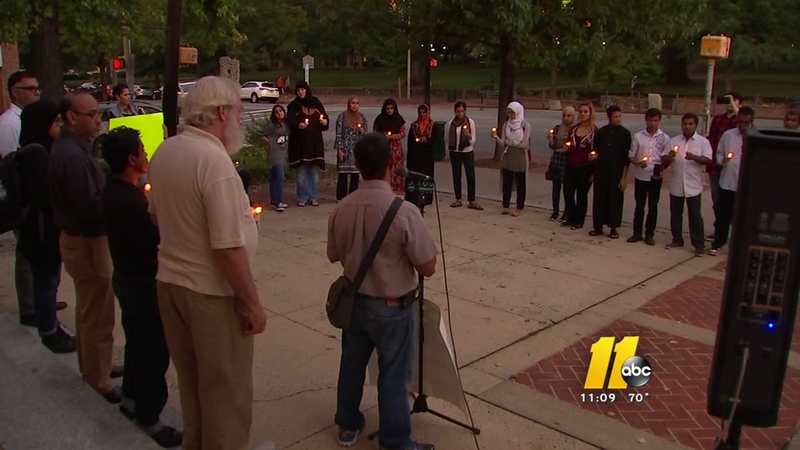 CHAPEL HILL, North Carolina (WTVD) -- The Carolina Peace Center held a vigil Monday on Franklin Street in Chapel Hill to raise awareness of and call for change to the Rohingya genocide taking place in Myanmar.

According to the Center, there are more than 40 Rohingya living in the Chapel Hill and Durham area. The vigil in part was aimed at making them feel welcome and show support for them and their families suffering back in Myanmar.

But Myanmar leader Aung San Suu Kyi is defending her country against international criticism over an exodus of hundreds of thousands of Rohingya Muslims by saying most of their villages remain intact, and that it's important to understand why conflict did not break out everywhere.

The Nobel Peace laureate's global image has been damaged by violence since Rohingya insurgents attacked Myanmar security forces on Aug. 25. More than 400,000 Rohingya have fled their villages, many of which have been burned. The government has blamed the Rohingya themselves, but members of the persecuted minority have said soldiers and Buddhist mobs attacked them.

Suu Kyi told foreign diplomats gathered in Naypyitaw that "more than half" of Rohingya villages were not affected by the violence. She invited the diplomats with visit those villages so they could learn along with the government "why are they not at each other's throats in these particular areas."

The Rohingya have had a long and troubled history in Myanmar, where many in the country's 60 million people look on them with disdain.

Though members of the ethnic minority first arrived generations ago, they were stripped of their citizenship in 1982, denying them almost all rights and rendering them stateless. They cannot travel freely, practice their religion, or work as teachers or doctors, and they have little access to medical care, food or education.

The U.N. has labeled the Rohingya one of the world's most persecuted religious minorities.