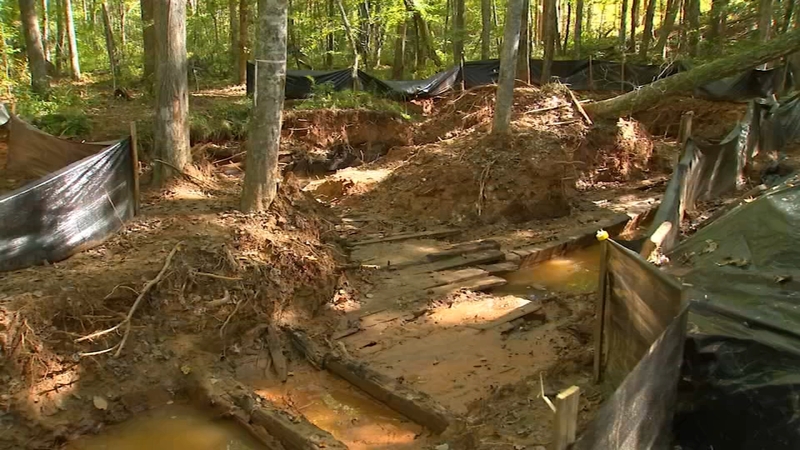 NASH COUNTY, N.C. (WTVD) -- A Nash County father and son have made a historic discovery uncovering a ship built more than 100 years ago buried on their land.

Tim and Ross Fisher say the drought left the land so dry at the beginning of October pieces of wood and steel from the ship were exposed.

"I just sampled a spot right here because it was completely dried up," Tim Fisher explained. "There was no water running and I hit some wood seven feet down and knew stamp mills weren't built quite like that."

Fisher and his son bought the 14 acres of swampland outside Nashville six years ago because it was the site of a former gold mine.

"People would say, 'you're crazy buying that land,' Fisher explained. " I guess in the end it wasn't such a bad thing."

"This whole area was part of the Portis Gold Mine," he added. "A very big gold mine and a lot of historic things happened here. A lot of people don't know about the gold mines in eastern North Carolina."

The Fishers have a passion for exploring and hunting for fossils and prospecting for gold. They produce their own outdoor show, Eastern Outdoor Expeditions, documenting their historic finds including megalodon teeth and whale bones uncovered in N.C. riverbeds.

The discovery in Nash County is believed to be the Robinson Gold Dredge, a vessel built in the early 1900s in New York then shipped in pieces by train to North Carolina. Research shows it was rebuilt in Nash County and used to dredge the land for gold.

Fisher says dikes were built to float the vessel up the hillside where it ultimately was abandoned until he discovered it.

"This vessel, what books say. It's 94 feet long, 32 feet wide and the hull is 7 feet deep," Fisher said. "So, you can walk the hull. It is taller than you are, so you can walk around the lower end of it. It's all wood. It's a rare thing to find a wooden hull dredge in all our documents we are reading. It's very rare."

The Army Corps of Engineers is working with Fisher to develop a plan moving forward to preserve the vessel and protect the environment as it is excavated.

Fisher says the N.C. Archeological Society conducted a ground-penetrating radar of the boat to establish a map.

The vessel appears to be well preserved as it was buried under three feet of soil.

"It's still got the red paint on it," Fisher said showing a piece of wood. "This came out the hull and the wood is not rotten."

Fisher plans to work with the state and the archeological society to expose as much of the vessel as possible so it can become a teaching tool for visitors.

"There's' still a lot here that hasn't been found yet," Fisher said. "I can promise you that. I know there's a lot here that hasn't been told. And, I hope I have an opportunity to expose that and tell more of a story about the things that happened here."
Report a correction or typo
Related topics:
community & eventsnchistorytreasure huntcommunity
Copyright © 2022 WTVD-TV. All Rights Reserved.
TOP STORIES
Heaviest snow shifts west, dusting to 2'' likely in Triangle
Former NCSU footballer Torry Holt named to NC Sports Hall of Fame
Biden confirms he will nominate first Black woman to SCOTUS
Change being made to Holocaust curriculum in NC public schools
Frigid temperatures leave Durham families in the cold
LATEST: N95 masks expected to arrive at CVS, Walgreens
Here's why thousands of NC employees still are not working
Show More
Brazen burglary of Raleigh shoe store caught on camera
Family of murder victim hopes billboard leads to arrest in case
Toddler credited with saving family of 7 from devastating house fire
Navy discharges 23 sailors for refusing COVID-19 vaccine
Chiefs fans donate $178K to NY children's hospital after beating Bills
More TOP STORIES News