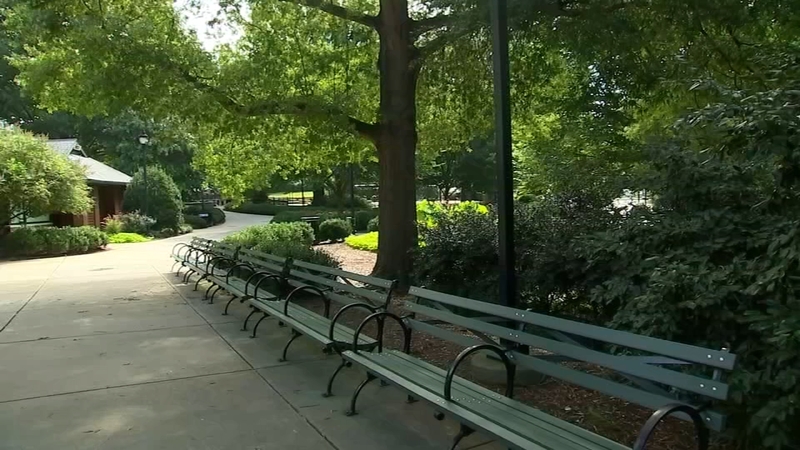 RALEIGH, N.C. (WTVD) -- There's an eerie silence that has settled over Pullen Park.

"The playground is closed!" one 2-year-old emphasized, a reality that is disappointing children all across the Triangle.

"Children need to come out and play and not to be stuck at home doing nothing," said parkgoer Brittany Castro-Perez.

As of noon Tuesday, there are more than 1,100 signatures on a new petition to keep kids at play. Moms had a mixed reaction.

"Kids getting COVID, so spreading it, It's just scary times, but I have friends in other states who have been on the playground and their kids have been fine," said mother Shannon Yahapour. Her statements were echoed by her sister-in-law.

"I think I'd have to agree," said Samantha Yahapour. "It's a lot it in the approach parents take."

RELATED: These summer activities put you at the highest risk of spreading or catching COVID-19

The change.org petition begs the state to allow playgrounds to open during phase two; citing socialization and development concerns. In Gov. Roy Cooper's initial plans to reopen the state, playgrounds would have been allowed to open in phase two, however, health leaders decided to keep them closed, along with gyms, bars, bowling alleys and other entertainment venues.

"It's tough," said Shannon Yahapour. "I've got two girls in preschool and they thrive off that interaction."

According to experts at University of North Carolina at Chapel Hill, it's not as much about contamination as it is control--keeping kids socially distant. Adding that while surface contraction is secondary, there would need to be a level of social distancing enforcement.

"A lot of it comes down to the parents taking responsibility for their own actions and their children and staying home if they're sick," said Shannon Yahapour.

The pandemic forced families to get creative and find other ways to keep kids active. Where swings would normally sway to the tree tops, they blow in the breeze. The carousels at Pullen Park are still, the train no longer on its tracks, leading nature to entertain.

"We've gotta figure out something to get them back on the playground because this is going to be life from here on out," said Samantha Yahapour.
Report a correction or typo
Related topics:
societyraleighcoronavirusplaygroundreopening nc
Copyright © 2022 WTVD-TV. All Rights Reserved.
REOPENING NC
Downtown Fayetteville businesses seeing increased traffic this summer
Cooper lifts gathering limits and most mask rules
New jobs, expanded facilities part of Triangle transformation
A closer look at what it will take for NC to ditch masks entirely
TOP STORIES
Snow fall begins in some parts of central North Carolina
NC prepared as winter storm brings rain, snow and sleet
Schools in Wake, Durham counties to close Friday
Contact tracers' role changes as pandemic reaches new heights
Flavor District, Triangle's largest 'ghost kitchen' to open in fall
Residents in Wilson prepare for black ice and snow
LATEST: Many testing sites closed Friday because of winter storm
Show More
Reporter hit by car on live television, but continued reporting
Check your tires before -- and after -- the wintry weather
American Airlines flight diverted over maskless passenger
'We can't get any more': Stores struggle to restock shelves
Essentials to keep in your car during winter storms
More TOP STORIES News