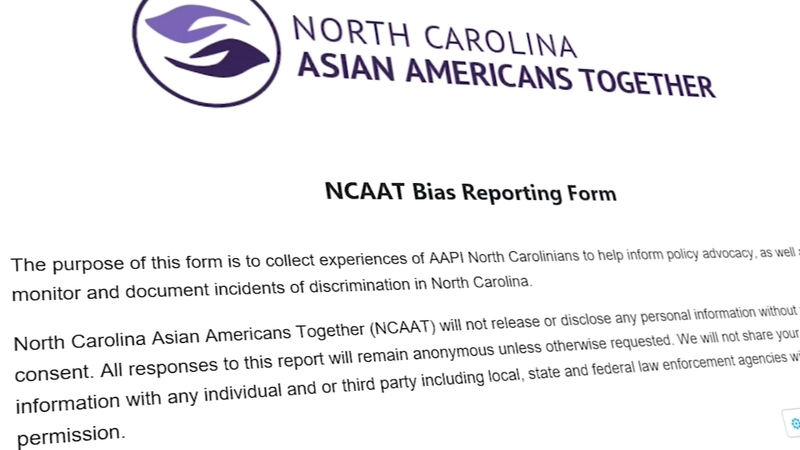 RALEIGH, N.C. (WTVD) -- By some estimates the world's population is 60% Asian. So it's hard to look at someone who appears to be Asian and determine the country of their ancestry.

But Asians who live in America, no matter their ancestral home, are reporting being singled out by those who are calling COVID-19 the Chinese virus.

Gabby Xiong, a North Carolina State University student from China said she was "really shocked" by an incident at her private dorm last month.

Weeks earlier, she decorated her door for the Chinese New Year holiday.

"The words on the decorations are good words to deliver happiness, peace, health, wealth to people," Xiong said.

In mid-April she returned home to find the display ripped.

She said she had been cautious while she was out on the streets, because an Asian friend had been verbally abused at a Raleigh convenience store.

But she didn't expect something to happen in the dorm where she said people have been very welcoming and open-minded.

"I had to think about it and to realize that it's probably racial discrimination because, I don't know, people know we are Chinese," she said.

Chavi Koneru, the executive director of North Carolina Asian Americans Together said, "COVID-19 has been racialized by some of our elected officials. It's easy to direct that hate towards the East Asian population."

Chavi Koneru, an American with Indian ancestry, said her group heard about hate crimes against Asians and Asian Americans in other parts of the country in late January and early February.

But, she said, despite a large number of Asians in the Triangle, incidents here didn't ramp up until last month after isolation in in our state went on longer than expected.

"And as that frustration grows for people it's easy to want to take it out on somebody," Koneru said.

Koneru's group now has an online portal for reporting of pandemic-related discrimination against Asians in our state.

She said online harassment of a UNC student is among those already reported.

Back at NC State, Xiong said this is no time for racial divisions.