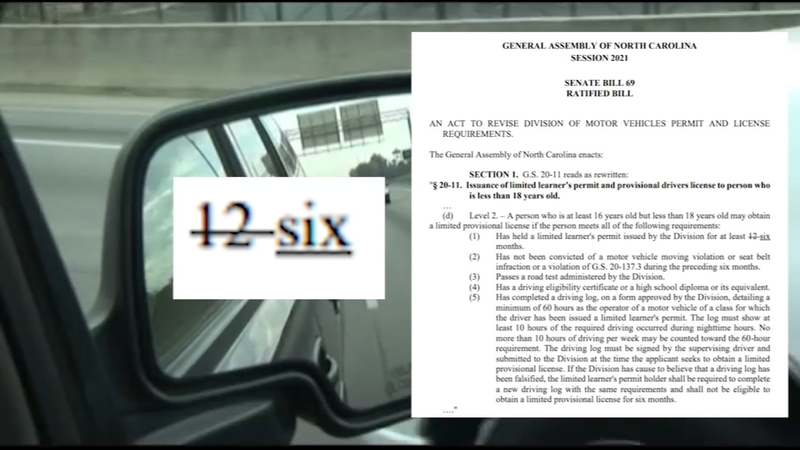 RALEIGH, N.C. (WTVD) -- A bill waiting for Gov. Roy Cooper's signature is aimed at helping teen drivers affected by the COVID-19 pandemic but researchers, driving instructors, and even parents are concerned that it would do more harm than good.

Students in driver's education classes across the state had to hit the brakes at the start of the pandemic last year when schools were shuttered.

In June, Cooper temporarily waived the road test for teens to get their license.

Now, he could also cut the time in half that teens need to hold a permit before applying for a provisional Level 2 license.

Michelle Drabek of Franklinton has not one, but two teenagers getting behind the wheel.

"I just feel like, the more practice the better, the safer," she said.

Her eldest recently got her driver's license after holding onto her learner's permit for two years.

"She wasn't mentally ready," Drabek said. "There's so much on our roads lately and so many people out on the roads and not careful drivers and the lack of paying attention on the roads. She sees it and she's like, I'm not ready to be alone yet. I said that's fine."

Under North Carolina law, teen drivers must spend 12 months with a learner's permit before applying for the provisional license that allows them to drive unsupervised.

Senate Bill 69, however, would cut that drive time in half, allowing teens to apply for a license only six months after getting their permit.

"Six months is a little frightening," Drabek said. "It's the response time. It's learning to really be aware of your surroundings all the time- it's a learning thing. And in six months' time, I don't think that's enough."

Teens would still have to log 60 hours behind the wheel with a supervising parent, be at least 16 years old, and pass a road test to move on and get their license.

The change in the law would be temporary, only applying to teens applying for that license through the end of this year.

Researchers at the UNC Highway Safety Research Center are concerned the consequences would be too great.

In a brief that the Center sent to state lawmakers in a failed attempt to stop the bill's passage, researchers referred to North Carolina's Graduated Driver Licensing system, which includes the 12-month learner period, as the gold standard.

After the GDL was enacted in the late '90s, the research center said 16-year-old driver crashes dropped by 37% while fatal/serious injury crashes declined by 46%.

"The 12-month learner period enables teens to get essential driving experience. The presence of an adult supervisor results in a very low crash rate among beginners as they develop driving skill and wisdom through extensive on-road practice," the brief stated. "The changes proposed in SB 69 would put well over 100,000 poorly equipped new drivers on North Carolina roads every year."

Mickey Tripp, who owns Carolina Road Driving School, said no matter what, it's up to the parents to make sure novice drivers get the experience they need.

"To me, a parent can't spend enough time with a kid in that learning phase," he said. "Every spare minute of every day you can promote time with that kid in the car during that learning phase- whether it's six months or a year- the parent needs to be in that car. Give them as many scenarios as they can."
Report a correction or typo
Related topics:
trafficraleighncteenagersdrivingdriver
Copyright © 2021 WTVD-TV. All Rights Reserved.
TOP STORIES
3 shot, 3 others injured during day of chaos at Streets at Southpoint
No. 24 NC State miracle rally stuns UNC 34-30
No. 5 Duke topples No. 1 Gonzaga 84-81
Deputies find 2 dead in Robeson County home
Stores kick off Black Friday but pandemic woes linger
Musical theater master Stephen Sondheim dies at 91
Show More
Volunteers forego shopping to fill bags with 100,000 meals
Missing gun belonging to Laundrie's parents wasn't made public
Black Friday 2021 deals shopping guide
Friends, family again search for Morrisville man missing after crash
New omicron variant stokes world fears, triggers travel bans
More TOP STORIES News