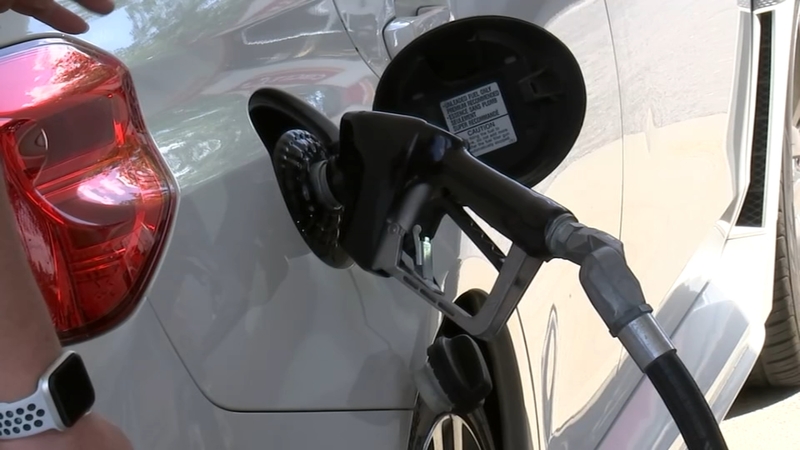 RALEIGH (WTVD) -- The state has not seen much of a budge in the number of gas stations regaining fuel in the last day, according to GasBuddy which is now reporting 58 percent of North Carolina stations are without gas.

North Carolina has hovered somewhere between the late 50s percentile as of Sunday -- an improvement from the past couple of days.

So far, both Durham and Chapel Hill-Carrboro Schools plan to make a return to the classrooms on Monday after having to cancel in-person learning due to the shortage.

On Saturday, Colonial Pipeline reiterated that it has since restarted it is back up and running after having to restart its pipeline system on Wednesday. The company says it will take "several days" for a return to normal.

State officials continue to discourage panic buying. They say people rushing out to fill up all their vehicles and topping off their tanks despite not really needing it was a major reason for all the gas station outages in the first place.

Where it can be found, gas has slightly increased in price. The national average for gas is above $3, but in North Carolina it is $2.93. A GasBuddy representative

"I want to be clear," he said. "We will not feel the effects at the pump immediately. This is not like flicking on a light switch. This pipeline is 5,500 miles long. It had never been fully shut down its entire history, and so -- so fully. And we have to -- now they have to safely and fully return to normal operations."

It will take "several days" for things to return to normal, and some areas may experience "intermittent service interruptions during this start-up period," the company said.

About 70% of North Carolina's gas stations were still without fuel amid panic-buying and about half the stations in Virginia, South Carolina and Georgia were tapped out, GasBuddy.com reported. Washington, D.C., was among the hardest-hit locations, with 73% of stations out, the site's tracking service showed.

The governors of both Virginia and North Carolina declared states of emergency to help ensure access to gasoline. Other governors urged people not to hoard supplies.

Cooper reiterated calls for residents not to make any unnecessary trips to the pump.

The search for working gas pumps has frayed the nerves of some drivers. Two people were charged with assault after spitting in each other's faces over spots in a line at a Marathon station in Knightdale, North Carolina, on Tuesday afternoon, authorities said.

The shutdown even affected hikers long the Appalachian Trail, which stretches from Georgia to Maine. They depend on cars and vans to access the trail and get supplies.

"Everybody's out here buying from the same gas pumps, so the lines are long, some are out - you've really got to look for it," said Ron Brown, who operates Ron's Appalachian Trail Shuttles.

In Georgia, racetracks and other entertainment venues rely on many fans who drive from surrounding states such as Alabama, Florida and Tennessee, and the concern is that higher gas prices - or shortages - might keep fans at home.

"Fuel prices do affect the amount of people who come, especially long distances," said Sydney Marshall, general manager of the South Georgia Motorsports Park in Adel, Georgia, and the Orlando Speed World Dragway in Florida. "It's definitely a concern of mine because if there's a gas shortage, people aren't going to be able to get here."