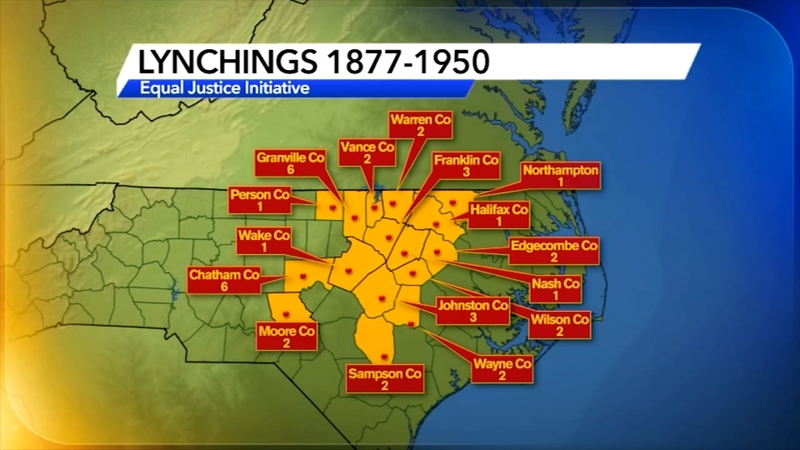 EMBED <>More Videos
DURHAM, N.C. (WTVD) -- A renewed conversation has come up about the word after President Donald Trump compared the ongoing impeachment process to a "lynching" on Twitter Tuesday. It appears to be the first time President Trump has used the term on Twitter while President according to ABC News.

Though no one is sure how many African-Americans were lynched in North Carolina, some researchers said the number could be 100 or as many as 300.

Experts said in the 1940s the lynchings began to be more secretive but they did not go away.

"He knows the power of a provocative statement and is either deeply ignorant of or deeply contemptuous of the history that underlies it," said Adriane Lentz-Smith, associate professor in the history department at Duke University. "He's not the first person to describe his political travails as a lynching: my first comparison point was Clarence Thomas during his confirmation hearings. Thomas described it as a 'legal lynching' as opposed to just a lynching and Thomas' position as a black man in the 1990s is very different."

Professor Lentz-Smith is a 20th century history scholar. She has focused much of her writing and research on the period around World War I -- a time when lynching was resurgent.

"A lynching during the World War I years and up really until the mid-century was a community event in which crowds gathered to see a person whose guilt or innocence wasn't really the point," she said. "The history of lynching in the United States is vicious and it's nasty and it was so deeply a part of the disenfranchisement and dis-empowerment of the people of color."

In 2014, the Equal Justice Initiative in Montgomery, AL -- the home of a museum dedicated to the legacy of enslaved black people -- published a report that counted more than 120 lynchings in North Carolina between 1877 and 1950.