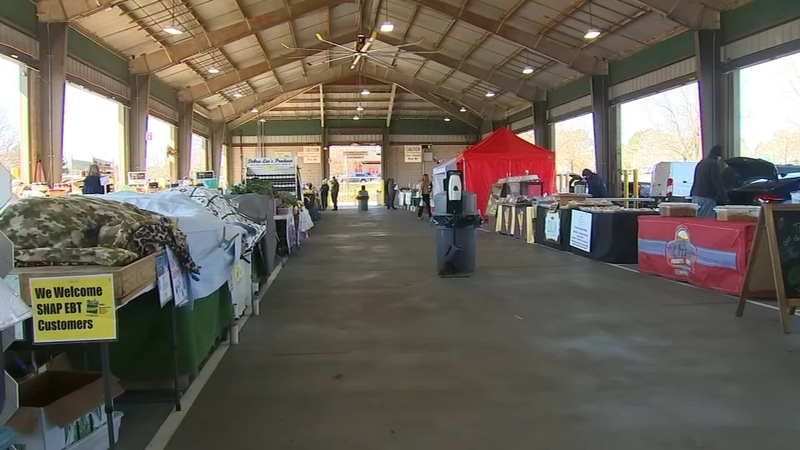 RALEIGH, N.C. (WTVD) -- Weather had a chilling effect on the number of shoppers at the North Carolina State Farmers Market Sunday, but Cheryl Moore of Moore's Fruits and Veggies remains optimistic.

"We're open seven days a week, so we hope people will come out and shop with us," she said. "We'll have strawberries coming out in a few weeks!"

An enthusiastic turnout for those and other produce she sells could boost the bottom line for her business.

"With the price of gas going up, we have to go up on our prices for vegetables. Tractors on the farm require fuel. From field to field, cooler to cooler to store the produce." Moore said. "We've also seen an increase in the price of vegetables, at least by one or two dollars. So far, people haven't had an issue with that."

Nearby, new vendor Lucas Soler has bottles of olive oil and vinegar imported from Spain for sale on his first weekend at the market. He's not discouraged by the relatively small number of browsers there.

"It's rather cold, right? So, the cold is affecting us more today than the gas prices, I think," Soler said. "We're only 20 minutes away so it's not affecting us that much. But we're noticing a change as we do local deliveries. Definitely affecting the cost of the car."

Steve Wessells shopped for produce and more during his time at the market. A car dealer from De Kalb, Illinois, Wessels almost called off his drive from there to visit his daughter in North Carolina. Compared to prices back home, he says ours are better than expected.

He said his crossover's tank holds 18 gallons of fuel. But asked how his business is doing these days, Wessells responds with a colorful description.

"Not worth a crap. And if you talk to most of the dealers, their lots are half full." Wessells added. "They're having a hard time getting cars too."

But the farmers, vendors and their customers could get a bit of a break by the end of the week. That's when forecasters predict temperatures could rise into the 70s.