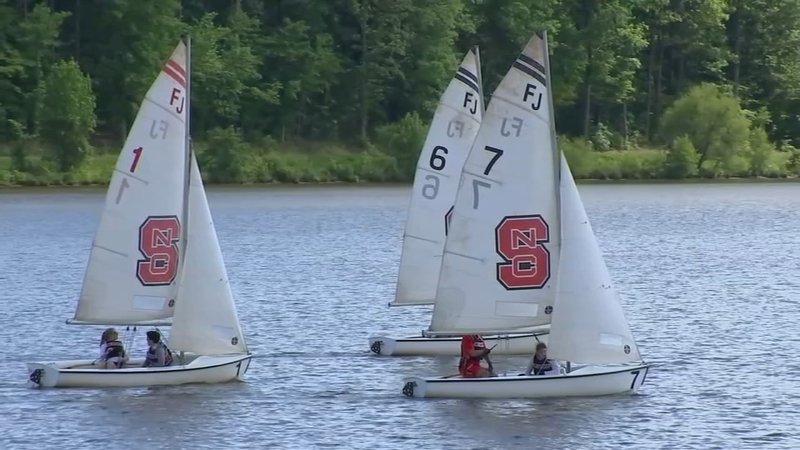 RALEIGH, N.C. -- Odds are you didn't even know NC State has a sailing team, much less a sailing coach, but Dana Magliola has been that guy for the last nine years.

"The hard work that our kids do, these student-athletes get out there," Magliola said, "The time they put on the water, off the water, the travel, the sacrifice, all of that came together this year."

This year, for the first time in school history, the Pack sailors have qualified for nationals in Annapolis. For a non-varsity team, it's a massive accomplishment. Co-captain Olivia Gregg revels in the memory.

"Our B Fleet pairing crossed the finish line and we were just elated," Gregg said. "Scott capsized our boat and we went swimming for a little bit."

Scott, in this case, is co-captain Scott Harris.

"It's definitely an adrenaline rush," Harris said. "Sailing definitely has its high moments and low moments, but those really high moments keep me coming back for sure."

Harris grew up on the water in Wilmington. Sailing is the only life he's ever known. Magliola recruited him to NC State. His coed partner Olivia was also introduced to the wind and water at an early age.

"My dad actually taught me on Lake Crabtree," she said. "He took me out on a Sunfish and taught me how to sail. and I loved it."

For Harris, who'd only ever known solo sailing, 2-person boats took some getting used to.

"It's definitely an adjustment having another person on the boat but it's really fun," he said. "You get to know somebody pretty well and sail with them and travel with them."

Don't be mistaken, there's a vast difference between sailing recreationally and racing, as Gregg explained.

"That's mostly when the roll tacks happen," she said. "You'll probably see us trying to just be as quick as possible with everything and be in line and be ready to go."

Magliola said the team was "ragtag" when he first started as the coach, but since then it has grown to be more than competitive.

"Some regattas, we compete against 17 or 18 other teams so it's a lot of intensity," he said.

Making nationals was the team's goal at the start of the year. The Pack made it that far. Now they want to go fast when they get there. As Magliola put it: