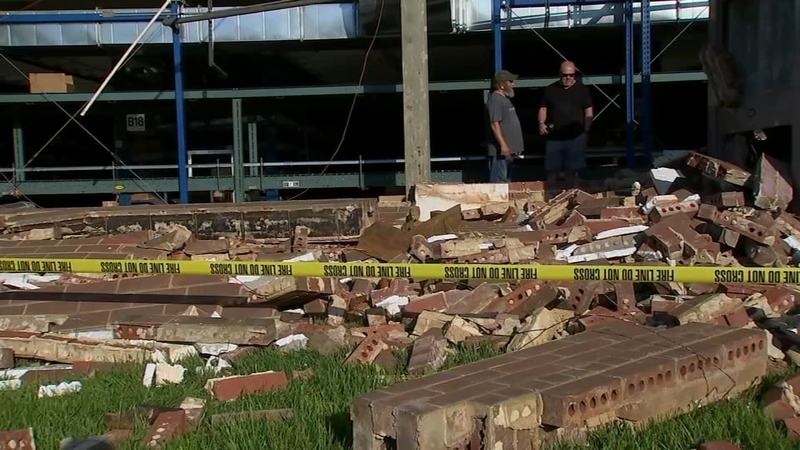 At least one tornado touched down as warnings were issued for Person, Durham and Orange Counties on Friday afternoon

ABC11 meteorologists said a confirmed tornado touched down in Orange County near Mebane. Kirby Saunders, Director of Orange County Emergency Services, said homes were damaged in Mebane and part of a wall was torn away from the Gildan Mebane Distribution Center on East Washington Street.

Tornado Watch now cancelled for the Sandhills. However, the tornado watch has been extended until midnight for everyone else. Stay weather aware throughout the night w/ @ABC11_WTVD pic.twitter.com/Rqcyboi15F

The county has not been able to confirm whether the damage was caused by a tornado, but Saunders said several callers to 911 reported seeing a funnel cloud.

Here’s a close up. @OCNCGOV hasn’t confirmed it was definitely a tornado but several callers reported seeing a funnel cloud #abc11 #ncwx pic.twitter.com/h2J8tSfnG4

In addition to a 911 call about a potential tornado at 5:18 p.m. from the Gildan Distribution Center, the county received several more calls, including from residences on Frazier Road and Mace Road that reported damage, including fallen trees and downed power lines.

Saunders said 30 employees were inside the distribution center, which employs 150 people when the storm struck and ripped off large chunks of an exterior wall. There were no injuries reported.

Part of a wall was torn away from the Gildan Mebane Distribution Center on East Washington Street.

The second shift manager at Gildan said he got everyone out when he started smelling gas.

"All of a sudden out of the blue, it was just a strong wind that got even stronger and stronger and the next thing I knew it," said the manager, who did not want to be identified. "It was a very scary feeling. I'm not going to lie.

"It was sprinkling. It wasn't thundering and lightning and all of a sudden here come the wind -- you could hear it," he added. "Five to 10 seconds of real loud blowing and then it was gone. When I heard it, I knew it was coming I just didn't know where. And there's nowhere to go -- just thank God it hit the front of the building."

Here’s a wide shot of the facility in Mebane that was hit by a tornado today #abc11 #ncwx pic.twitter.com/1CWvnKdpDB

Rick Regan, the Director of Operations, said he had just gotten home.

The distribution center is scheduled to close in the next couple of months and move operations to Charleston. Maintenance had come to shut off the gas

"We were fortunate in that aspect of it that they were not working on this side," Regan said.

Scottie Torain said he heard the wind and saw the trees bending. A tree fell at his house.

"I lost a tree here, which was on my neighbor but it fell this way instead of going the other way," Torain said. "If it went the other way, it would have gotten his house."

Crews were out assessing the damage to the homes and Saunders said the county would work with any residents who might be displaced and need emergency housing assistance.

This storm really tore a path through other streets in Mebane as well. Crews working to clear debris now and get power back on #abc11 pic.twitter.com/Ws1YmARApW

Also in Orange County, the Highway Patrol said a state trooper was shocked by downed power lines on Fraiser Road. The trooper was working to clear downed trees and power lines when he came in contact with a live wire.

The trooper was taken to a hospital and described as stable.

The risk for severe weather Friday has was rated as a level 3 of 5, which included a chance for isolated tornadoes.

There are also reports of trees down across the area. Crews in Cary were working to clear one that fell on Yates Mill Road on Friday afternoon.

Another tree landed on a house in Wake Forest.

Heavy rain also came down outside the General Aviation Terminal at Raleigh-Durham International Airport about mid-afternoon.

The National Weather Service reported half-dollar-sized hail and 60 mph wind gusts near RDU just before 4 p.m. More than 100 flights were delayed Friday by the weather.

In Fayetteville, police officers responded to Skibo Road at Freedom Parkway Drive in reference to a power line that broke during the storm. Utility lines are down across the road causing a hazard.

Skibo Road is closed between Cliffdale Road and Chason Ridge Drive while repairs are made, police said.

Drivers are advised to use an alternate route.

Also in Fayetteville, PWC crews responded to multiple outages as a result of the damaging storms. Approximately 13,000 customers were without power around 9 p.m. with northern Fayetteville, along the Ramsey Street corridor, reporting the highest number of outages.

Late Friday night, power had been restored to more than 12,000 customers. By 10:36 pm, crews had restored power to the majority of customers along the Ramsey Street corridor. About 800 customers remain without power.

Police also said Ramsey Street from Kings Creek Drive to Shawcroft Road was shut down in both directions while crews work to repair damaged poles and restore power.

This storm front that moved into the region already spawned several tornadoes that whipped through areas of Texas and Oklahoma.

Now THAT is a ⛈ cloud. Checking out the conditions all afternoon with @BobGVT to get you through the storm #abc11 #ncwx pic.twitter.com/mDiagj9a4L

Isolated storms started developing ahead of the main line of storms. That main line was expected to push into the region around 7 or 8 p.m.

The chance for severe weather will linger through about 11 p.m. Isolated showers could still happen overnight into Saturday.

Saturday morning will be mostly dry. Isolated, but not severe, storms could pop up Saturday afternoon. Temperatures will be cooler Saturday--just getting up to the low to mid-70s.

Mother's Day on Sunday will be mostly dry, cloudy and cooler. High temperatures Sunday may not even reach into the 60s.