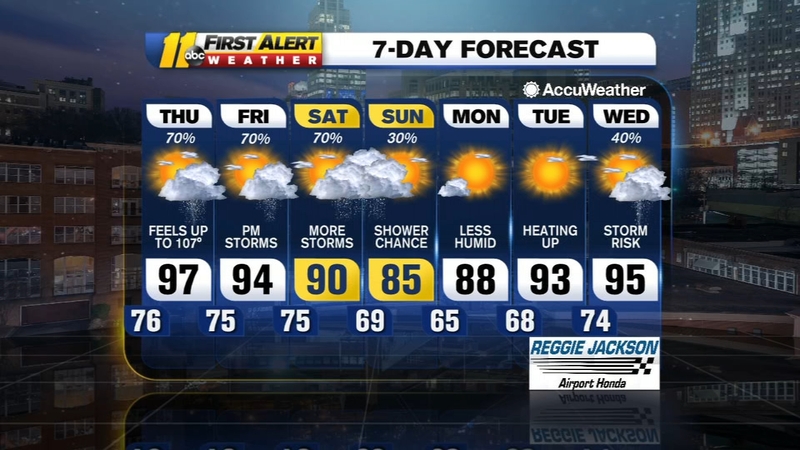 RALEIGH, N.C. (WTVD) -- Another day of withering heat and wilting humidity today could be the lead in to some strong to severe thunderstorms in parts of our area. In closely examining the situation as it unfolds at this hour, and in looking at the most recent modeling (both global and high-resolution), the sentiment is that the greater risk for severe thunderstorms will pass north of the Triangle late this afternoon and early tonight. Surface low pressure in central Indiana looks to track more west-to-east than northwest to southeast, with the best uplift up across Virginia. Still, the risk is on the table, and can include damaging winds and flash flooding as the primary threats.

After things quiet down overnight, we may do this all over again tomorrow. We're bringing the forecast high up to 95, based on more morning sun than earlier anticipated. Still, with more of a northwest lean to the flow aloft, it appears as if the area may be in a better target zone for afternoon and evening convection. And again, the primary threats look to be tied to damaging winds and flash flooding with any stronger cells. That doesn't preclude hail and/or tornadoes, just that these may not be as likely.

Another upper level feature looks to head into the area on Friday, with yet another opportunity for thunderstorms, especially in the afternoon and evening. As that is taking place, a stronger upper level feature will roll through New England. This will have the effect of nudging the strong upper level ridge of high pressure currently along and just west of the Mississippi Valley farther to the west. In addition, a cold front will start to advance southward out of the Great Lakes into the Ohio Valley and northern mid-Atlantic region. As the front then sags farther south on Saturday toward our area, clouds will inevitably win out over sun, and there's a strong likelihood of showers and thunderstorms on Saturday. This may keep temperatures from reaching 90 officially!

The question remains does the front clear us out completely on Sunday, which would mean no rain at all? Or is there one last little disturbance that comes through before that happens, triggering a couple of showers and maybe one last thunderstorm on Sunday? We are still leaning toward a dry forecast from the Triangle on north, with clouds breaking for some sun, while areas to the south tend to stay somewhat cloudier with a better chance of seeing a couple of showers and maybe a thunderstorm.

By Monday, high pressure building southward out of New England into the mid-Atlantic dries us out, resulting in more sunshine and a bit lower humidity. Temperatures Sunday night drop to the mid 60s. Monday will be the nicest day of next week, then then heat returns Tuesday, with the next front approaching on Wednesday. And with it, the next chance of thunderstorms in the area.

Have a great evening!