NYC Pride March makes its way through streets of Manhattan 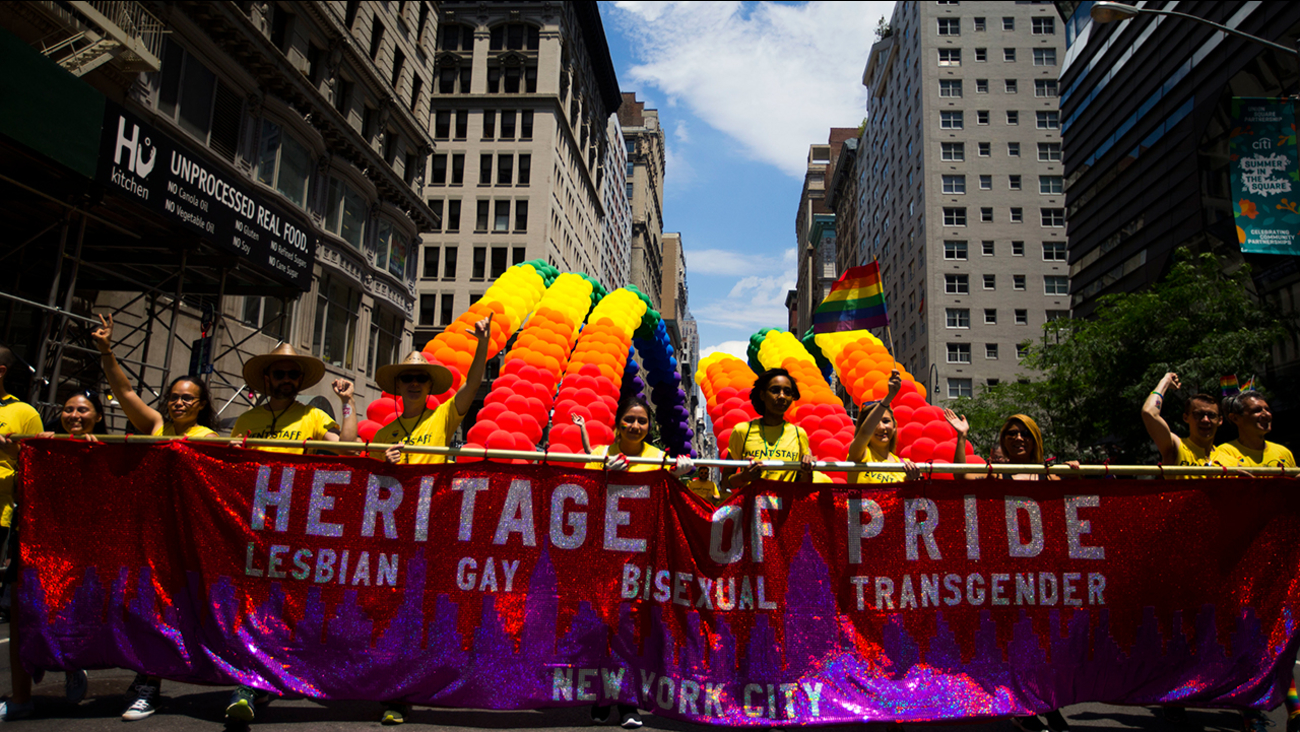 The annual march, which started at 36th Street and Fifth Avenue, ends in the West Village.

The NYC Pride March started in 1970 as a civil rights demonstration on the 1-year anniversary of the Stonewall Uprising.

Today, it is one of the world's best-known LGBT events, with 350 marching contingents and more than 2 million spectators in 2016.

This year's theme, "We Are Proud," speaks to the LGBT community's unwavering ability to rise and be proud, even in the face of the existing political environment.

The march in New York and other cities are spotlighting resistance to what participants see as new pressure on gay rights while contending with the prospect of protests over the events' own diversity and direction.

In a year when leaders are anxious about President Donald Trump's agenda, both the New York and San Francisco events were headed by groups more focused on protest than celebration.

In New York, grand marshals - including the American Civil Liberties Union - were chosen to represent facets of a "resistance movement."

LGBT activists have been galled by the Trump administration's rollback of federal guidance advising school districts to let transgender students use the bathrooms and locker rooms of their choice.

The Republican president also broke from Democratic predecessor Barack Obama's practice of issuing a proclamation in honor of Pride Month.

The 2017 Pride March is making its way down 5th Ave! #abc7ny #WeAreProud pic.twitter.com/QX1yS1AytI

A few attendees wore "Make America Gay Again" hats, while one group walking silently in the parade wore "Black Lives Matter" shirts as they held up signs with a fist and with a rainbow background, a symbol for gay pride.

Still, others protested potential cuts to heath care benefits, declaring that "Healthcare is an LGBT issue."

Revelers started to line up early Sunday for the march, waving rainbow flags. Kendall Bermudez, 21, from New Jersey, said she thought people might be afraid to come out this year.

"But I think with all these people here, they're going to show we're fighting back and we're proud of who we are," she said. "I think we're going to overcome it and show Trump who's boss, well, who's the real boss."

Earlier Sunday, New York Gov. Andrew Cuomo said the state would continue to lead the way on equality - and Washington would eventually listen.

He said the state is "at the spearhead of the movement for social justice for the LGBT community."

Cuomo, a Democrat, was speaking Sunday at a ceremony that formally appointed Paul G. Feinman to the New York Court of Appeals, the state's highest court. Feinman is the first openly gay judge to hold the position.