In a deal with prosecutors, Watson admitted providing illegal benefits to UNC players in an attempt to get them to sign with him when they turned professional.

The plea deal included a suspended prison sentence and probation on the 13 counts of athlete-agent inducement. He must also pay a $5,000 fine.

RELATED: MARK ARMSTRONG SAYS UNC AGENT SCANDAL WAS FOR NOTHING

"He, among all the actors in this, was or should have been aware of laws pertaining to athlete-agency and he violated those laws knowing those things," said Jeff Nieman, assistant district attorney.

"He was working out of his house, and I believe he just sort of got in over his head and made some really bad decisions that he's regretted," Babb said. "He lost that business, he lost his license, recently has lost his marriage, and he's got three young children.

"Even though things went completely badly for him, he's making the right decisions," Babb added, "pulling himself up from the bootstraps to recover from the bad decisions that he did make."

One of Watson's associates also accused of violating North Carolina's law that bars illegally luring collegiate athletes into contracts admitted guilt in a Hillsborough courtroom Monday, but did not plead guilty.

If he complies with the terms of his deal with prosecutors, the charges against Patrick Jones of Cartersville, Ga. will be dropped.

Jones is accused of trying to get UNC defensive end Robert Quinn to sign with Watson.

Michael Wayne Johnson Jr. is also expected to go before a judge this week. Investigators allege he also gave improper benefits to UNC players to encourage them to sign with Watson when they later turned pro.

Christopher Hawkins and Willie Barley, who're also charged in the case, were not in court Monday. Their court date has been rescheduled for May 15.

Players Marvin Austin, Greg Little, and Quinn were kicked off the UNC football team after an NCAA investigation found they had accepted thousands of dollars in trips and gifts from agents. The same investigation said a tutor helped them write papers - violating the honor code.

Due to football program investigations, 13 players sat out the 2010 season opener against LSU, with six players sitting out the entire season. Three of those were either dismissed from the team or declared "permanently ineligible" by the NCAA.

In September 2010, Associate Head Coach John Blake resigned because of questions about receiving money from an agent in California. In July 2011, UNC fired Head Coach Butch Davis. Davis has denied knowing anything about any wrongdoing.

In March 2012, the NCAA issued formal sanctions against the Carolina football program.

In 2014, Kenneth Wainstein, former federal prosecutor commissioned by UNC to probe problems at the school, released a more than 130-page report uncovering 18 years of academic fraud.

In the wake of the report, the NCAA said it was reopening its investigation. That case is still pending. 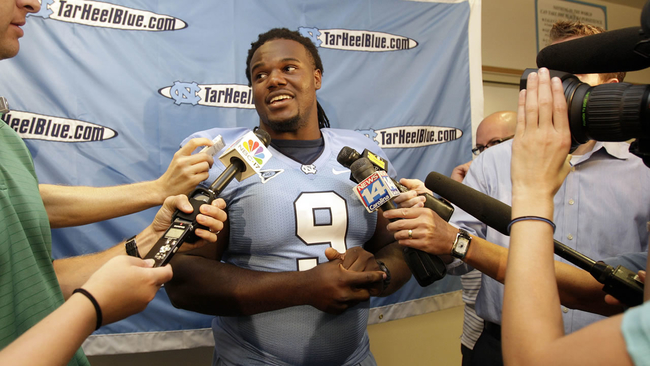