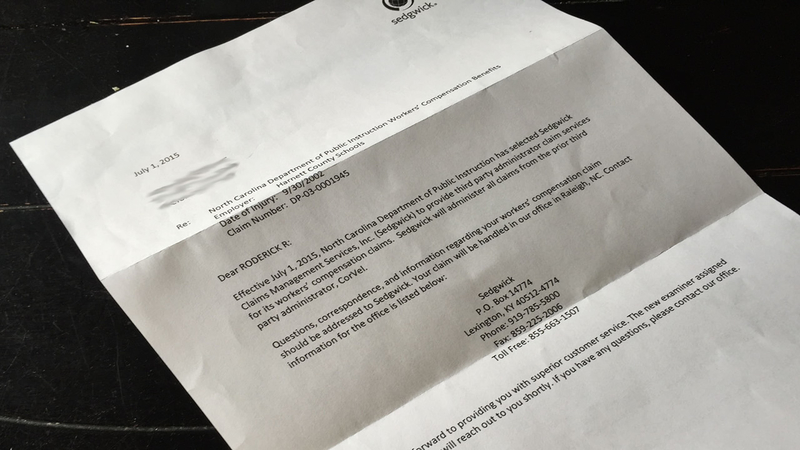 RALEIGH (WTVD) -- North Carolina state employees injured on the job have gone nearly a month without workers compensation checks from the state, but could see relief within the next week.

The Chief of Insurance for N.C. Deptartment of Public Instruction, Eileen Townsend, said the department is fully aware of the problem and is working around the clock to fix it.

On Wednesday, the department approved and mailed out 400 checks that should have been sent two to three weeks ago.

Townsend said the problem started around July 1 when DPI awarded the contract for the administration of workers comp claims to a new third party administrator.

DPI receives more than 6,000 new workers comp claims a year. During the data transfer from CorVel to Sedgwick, Townsend said many claims fell through the cracks.

"We tried to get it done on time," she said. "We did everything we could at the onset. But data did fall through the cracks. Things do happen especially when you're trying to do a data conversion."

"It's not because we want to be out," said Roderick Stocks, a former Western Harnnett High School teacher injured on the job in 2002. "It's because we had an injury and because of that injury we're here now trying to make ends meet. And making ends meet means that hey, we rely on the checks that's coming and if they don't come, then how can we survive?"

Stocks has gone nearly a month without a workers comp check. He has not been able to pay his bills and has now received final notices on his water and electricity.

Several others affected by the delay have called ABC11 complaining of similar hardships.

Townsend said DPI won't be able to further compensate those for hardships suffered during the unexpected delay.

"My heartfelt sympathy and concern for those that are truly in need of this," she said. "I wish, I wish I had more to say, more to offer."