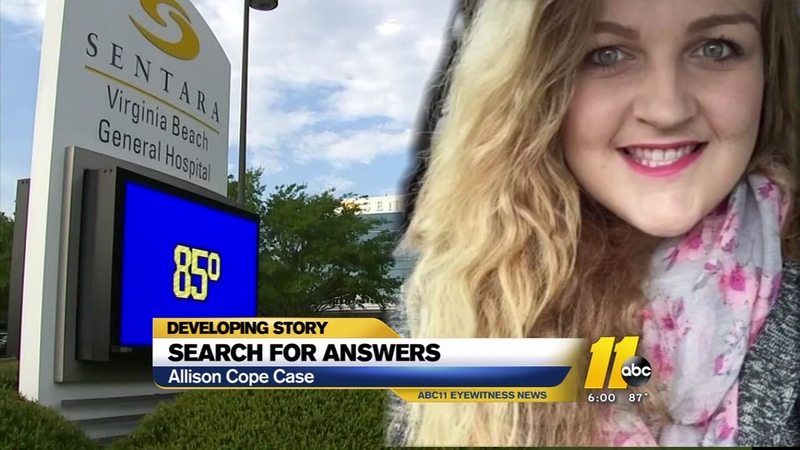 The Raleigh-Durham International Airport Authority Police Department said it was notified by police in Virginia early Sunday morning that the 24-year-old had been spotted near the oceanfront on 9th Street.

Cope appeared to be okay, but was taken to the Sentara Virginia Beach Hospital by an officer.

Her friends told ABC11 Monday that Cope is still in the hospital, but her name was no longer listed, so her condition was being kept private.

On Sunday, Cope was listed in good condition. However, she refused to speak with ABC11 about the incident.

Monday, Cope's roommate said the situation has been a very upsetting experience for everyone involved, and they are now focused on Cope's recovery.

"She is the light of our lives and we are thankful to have her back," Sarah Kosinski said in part in a statement. "We appreciate all the help and support from the community and we ask for privacy."

Cope, who has been a supervisor at the Starbucks in RDU's Terminal Two for four years, disappeared during her shift Monday afternoon.

Police said she was officially reported missing at 7 p.m. Monday night when she never returned after leaving for her break.

RDU police later released three surveillance photos that showed Cope and her car at a Shell gas station at 942 Durham Road in Wake Forest at approximately 4:15 p.m. on Monday afternoon.

In a news release, RDU police said, "Airport police have thoroughly reviewed the video and there is no evidence that she is under any distress. Furthermore, RDU Police have uncovered no evidence of any crimes being committed at the airport or anywhere on the airport campus."

The images didn't explain why Cope left her phone and purse behind at work.

Her friends said last week that Cope was not the type to not show up for work or to the dog rescue she runs with her friend.